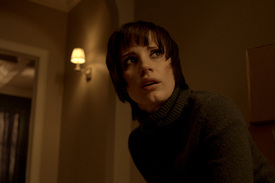 Oz: The Great and Powerful is predicted to earn just over $5 million at the Russian box office in its second weekend of release, more than enough for the big budget Disney extravaganza to keep its hold at the top of the charts. But there could be some unexpected movement below as the Jessica Chastain ghost chiller Mama could capitalize on its strong per-screen showing last weekend to climb to #2 at the box office, displacing the raunchy booze comedy 21 and Over. Last week, the two films were within $300K of each other, with 21 taking the advantage, and 21 continues to have more screens in more theaters. But Mama not only has the better reviews -- not that that always means anything -- it also bested 21 at the per-screen haul by an average of nearly $1,500. With no other major contenders elbowing into the fray, this could be Chastain's weekend.