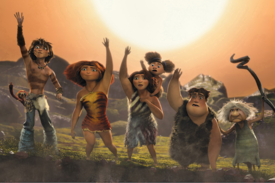 Here's something that won't surprise you: The biggest animated non-sequel opening in Brazil is 2011's Rio, which made $8.3 million on its debut weekend, and would go on to rake in a total of $33.5 million at the box office. The good news for The Croods is that it a) won this weekend, and b) should place #2 on the top cartoon list after Rio. The bad news is that it will be a very distant #2 -- so far, DreamWorks' caveman comedy is on track to make a solid, but much smaller $4 million. That number would put The Croods just above Brave, which launched to $3.6 million last summer and charged on to make a still-substantial $18.7 million. Can caveman cartoon Emma Stone clobber the film past the $20 million mark?