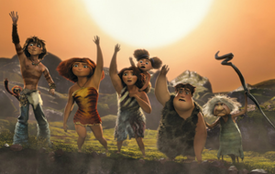 The Croods took over the world box office this weekend, posting a strong $108 million global cume as it took over the #1 spot in 44 of the 47 overseas markets it opened. The $63.3 million overseas total came in large part to exceptional openings in Russia ($12.9 million), Mexico ($9.5 million), and the UK ($8.3 million). The DreamWorks film received a day-and-date roll-out from Fox this weekend that included key markets in Europe and Latin America. It will expand to 19 additional markets next weekend.

Oz: The Great and Powerful continues its strong run in the overseas box office despite showing a 53% drop in the global market compared to last weekend. The Disney film grossed $21.7 million in 55 territories over the weekend for an overseas total of $178.8 million. The Disney film now posts larger overseas than domestic numbers. The global total stands at $356.4 million.

A Good Day to Die Hard earned $10.5 million overseas this weekend, largely coming from its Australian premiere ($4 million) and a $4.2 million take in China. The overseas total for the Bruce Willis franchise is $220.2 million, representing the majority of its $286.1 million global gross.

Jack the Giant Slayer took in $19.3 million from 47 markets this weekend, bringing its overseas total to $60.5 million. Bryan Singer's adventure film opened to tough competition from The Croods in Russia and the UK this weekend, finishing a distant second place in both markets. The film has a global cume of $116.5 million.

Identity Thief added Russia, UK, South Africa, Spain, and Ukraine but only saw its overseas total grow to $8.2 million in 23 territories. A packed release calendar in Russia and the UK this weekend didn't help the American comedy, grossing $2 million and $1.2 million in those markets respectively. The film is slated to open in Austria, Belgium, Germany, and German-Switzerland next weekend.

Hansel and Gretel: Witch Hunters grossed $1.4 million on its fourth weekend in Germany. It represented nearly half of the film's $3.5 million weekend in 35 territories this weekend. The overseas cume is $156.8 million and the global cume is $211.5 million.

Anna Karenina reached an overseas total of $52.4 million in 22 territories. The film's global total is $65.2 million.

Lincoln is still adding to its numbers in South Korea and Australia. The Steven Spielberg biopic has grossed $81 million overseas. The global cume is $262.5 million.

All the figures quoted in this story are estimated grosses.