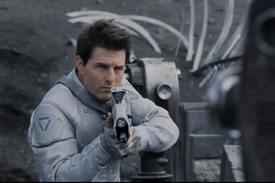 Tom Cruise is the first Hollywood actor to take advantage of the exploding Russian social networking site Vkontakte, which looks strikingly similar to Facebook. Cruise opened his account on Friday using a poster from Oblivion, his upcoming sci-fi flick directed by Tron's Joseph Kosinski, as his profile picture. He also tweeted "See you there!" in Russian when promoting his page on his Twitter account. Oblivion opens in Russia on April 11, two weeks before its U.S. premiere, and it's clear that he and the studio are thinking strategically in their determination to turn the film into a global success. Cruise's most recent Vkontakte post reads, "VK friends and staff, THANK YOU for the warm welcome! The world's talking about you! -TeamTC"