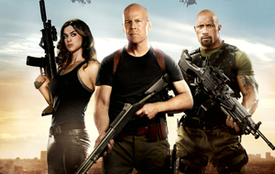 G.I. Joe: Retaliation posted the biggest global opening of the year last weekend with $80.3 million. It looks to continue to thrive with no clearly defined day-and-date opener lined up. G.I. Joe opens in Belgium, Croatia, Hungary, Iceland, South Africa, and Vietnam. The Croods, another strong hold-over, will add Poland, Taiwan, and Thailand.

The release of Oz: The Great and Powerful has already covered the global market and should begin to experience a steeper drop in the coming weeks. The Disney prequel to The Wizard Of has been nothing short of a success, grossing over $400 million in the global box-office.

Jurassic Park 3D had a limited run in several markets last weekend. The re-converted re-release of Steven Spielberg’s movie about an amusement park full of dinosaurs that eat people will open in Australia, Hong Kong, Russia, Ukraine, and several territories in the middle east this weekend. It performed well in previews in Russia last weekend, where it cracked the top ten despite appearing in less than 50 screens.

Talking about grinding money out of things that were once popular and that might still be popular if you re-brand and sell them again, the Evil Dead remake is slated to open in 20 countries along with North America this weekend. The remake of Sam Raimi’s seminal horror-comedy is scripted by Diablo Cody (Juno) and helmed by first-time feature director Fede Alvarez. Evil Dead screened at last month’s South by Southwest Film Festival to mixed reviews.

Check back with us on Sunday for updated live reports on the global box office.