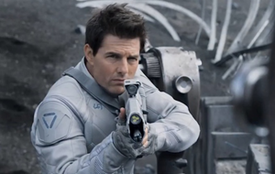 This decade has seen a tremendous economic growth for Brazil; a dynamic domestic market, rapidly emerging middle-class, and increasingly important consumer economy have all factored in making the country a financial hub living up to its potential.

Brazil's status as a film market has also been on the rise. It is among the ten most profitable markets in the world outside of North America, bringing in approximately $800 million in 2012. It is therefore telling when one of the biggest stars in the film industry has performed inconsistently in such an important market. Tom Cruise is as close as you get to a guarantee in the global box office, but his films have had mixed success with Brazilian audiences in the current decade.
.
The overwhelming success of Mission: Impossible - Ghost Protocol, Cruise's highest grossing film in Brazil with $13.2 million, was followed by two woeful performances: Rock of Ages, which failed to gross even a half-million dollars, and the much maligned Jack Reacher, which could only muster $2.7 million. All the other Cruise films to have grossed under $3 million in Brazil have been the sort of movies where Cruise's star persona is challenged with nuanced roles: Collateral, Vanilla Sky, Lions for Lambs, and Eyes Wide Shut. It is understandable if those films have difficulty selling abroad, but big-budget popcorn movies are an entirely different story. Oblivion opens in Brazil with strong expectations this weekend. Moreover, it could signal the future of Cruise's drawing power in Brazil: Will Oblivion give the star a chance to brush aside his recent flops, or will it signal the end of his days as a box office guarantee? The $3 million mark looms, but it will have to gross much more than that to be considered a success.