Halle Berry visited Brazil recently to promote the release of her new film, The Call, released this weekend to a lethargic $282,001 gross in 141 screens. The star power and personal visit failed to draw any momentum for the film, which was swiftly overshadowed by Oblivion's $1.9 million opening weekend. The Croods continued its strong run with a $1.4 million weekend, bringing its Brazilian total to $13.1 million and solidifying it as the highest grossing film currently in release. Vai Que Da Certo had another big showing in its fourth week, posting an additional $1.2 million to reach $9.9 million domestically. The Brazilian film only dropped 19% from last weekend, making it one of the best hold-overs in the country. 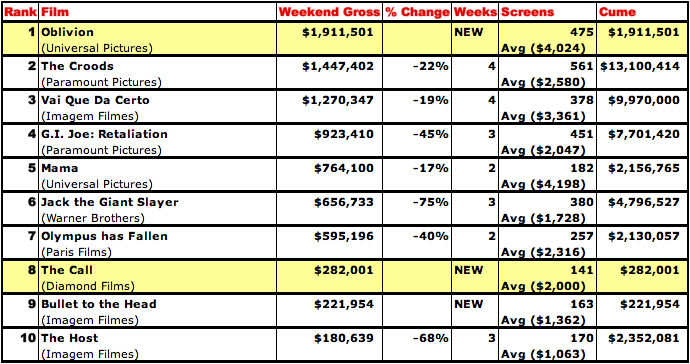