Olympus Has Fallen premiered at #1 over the weekend after Oblivion fell 67% in its second week in the U.K. The $3.4 for Olympus might not compare to last weekend's $7 million for Oblivion. Evil Dead did its part to eat into Oblivion's second week grosses; the horror film premiered with $2 million in 394 screens. The Croods added another million to raise its U.K. cume to $36.1 million. Academy Award winning director Susanne Bier's Love is All You Need, her follow-up to 2010's In a Better World, fared well in limited release. The film played in 131 screens and grossed $307,894. The Place Beyond the Pines was the strongest hold-over, falling only 13% in 181 screens to bring its U.K. cume to $2.5 million. Danny Boyle's Trance fell off the chart in its fourth week. The latest thriller from the Trainspotting director has grossed $6.6 million to date in the U.K. 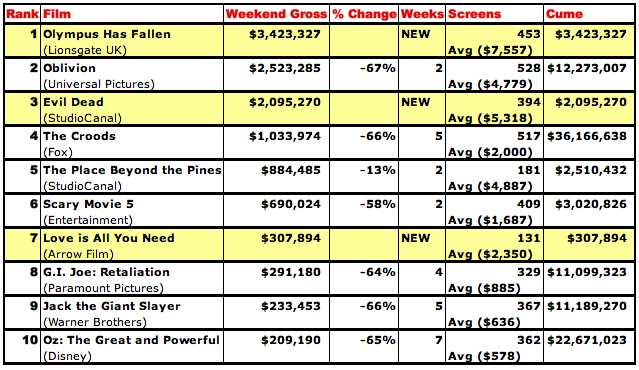 Tags: Global, UK, Olympus Has Fallen, Oblivion, The Place Beyond The Pines