Les Profs dominated the weekend in France with a $6.4 million opening, beating out six other new releases and strong hold-overs from The Croods and Oblivion. The French film's $12,282 per-screen average was the highest of the weekend by a considerable margin. Fellow domestic release, Les Gamins, grossed $2.9 million to beat Oblivion's $2.3 million second week take.

Wong Kar-wai's The Grandmaster premiered in sixth place with $1.1 million. The auteur's latest is his first foray into martial arts and a scaled international release will bring attention to the film's global potential. The Grandmaster has already grossed $45.2 million in China alone. Parker, the latest Jason Statham vehicle, and Gus Van Sant's Promised Land, the Participant film starring John Krasinski and Matt Damon, both grossed under $1 million on their opening weekend. The films faced strong competition with a slew of domestic and foreign new releases, as well as the hold-over strength of The Croods and Oblivion. All eyes will be on how Les Profs and Les Gamins hold in upcoming weeks with more premiere titles on the slate. 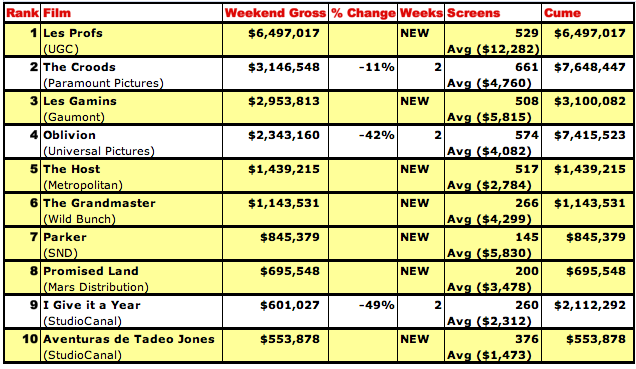