'Django Unchained' Has a (New) Release Date in China 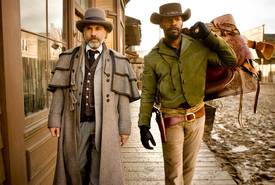 Django Unchained finally has a release date in China after officials pulled the film from release minutes into its first screenings earlier this month. Revisions to the film were reportedly approved by Quentin Tarantino, but they weren't enough to appease the gatekeepers of the world's second-largest film market. Sony now confirms that the film will begin its proper run in China on May 12. Tarantino's blaxploitation western has grossed $257.8 million overseas to date and has a $420.6 million global total. A strong performance in China could potentially lift the film to reach the $500 million global mark. The Chinese market offers no guarantees, however, as was the case with global blockbuster Skyfall. The James Bond film broke the $1 billion global mark but fell short of expectations in China with a $60 million gross. The new release date might impact the long-term projection of Iron Man 3, which recently announced a May 1 premiere date in China.