UPDATE GLOBAL: 'Iron Man 3' Reaches $1 Billion Ahead of the Weekend 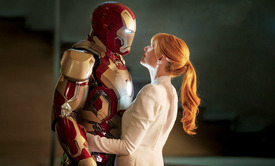 FRIDAY UPDATE: Iron Man 3 crossed the $1 billion global mark after 23 days in release. It is only the second Marvel film to break the billion dollar barrier, and the fourth Disney film to do so after Pirates of the Caribbean: Dead Man's Chest, Alice in Wonderland, Toy Story 3, and Pirates of the Caribbean: On Stranger Tides, and Marvel's The Avengers. Iron Man 3 crossed the $300 million milestone in North America after 14 days in release, the 9th Disney film to reach the figure.

THURSDAY UPDATE: Iron Man 3 reached $990.2 million globally yesterday, led by a strong $691.9 million grood from overseas. It is a matter of days before the films reaches the $1 billion mark.

WEDNESDAY UPDATE - Iron Man 3 can break the $1 billion global mark by Friday. The superhero film is posting Avengers-like global numbers, reaching $980.3 million to date. It is now the #13 film among highest grossing films in the overseas markets and occupies #18 on the all-time global box office list. Iron Man has now outgrossed the global numbers of Pirates of the Caribbean: At World's End ($963M), Jurassic Park ($967M), and Harry Potter and the Sorcerer's Stone ($975M).

Star Trek Into Darkness began its overseas roll-out over the weekend, grossing $31.7 million in seven markets. The combined figures from these territories are almost 70% better than the results of 2009's Star Trek in the same territories. The U.K. is the biggest market on the list, where the sci-fi film grossed $13.3 million in 556 locations. Star Trek: Into Darkness will began a large-scale expansion next weekend and will cover all the major international markets throughout the summer.

Oblivion opened in China this weekend and grossed $8.5 million. It's a mild victory for Oblivion, outgrossing the Chinese performance of director Joseph Kosinski last sci-fi film, Tron: Legacy, but far from any lofty blockbuster expectations that Tom Cruise's star-power suggests. The film's overseas total is $160.9 million with a global cume of $242.5 million.

The Croods added another $17.3 million overseas this weekend, breaking the $500 million global mark with a $536.4 million cume. The animated film is an overwhelming success for a non-franchise animated feature. It has grossed $363.2 million overseas.

Jurassic Park 3D got the green-light for a release date from China, which will be announced in the coming weeks. It should help the re-release gain higher numbers; the Steven Spielberg dinosaur epic has currently grossed $9.8 million overseas and $54.5 million globally.