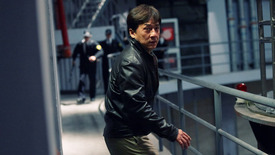 The New York Asian Film Festival and the Film Society of Lincoln Center are celebrating the release of Jackie Chan's 101st film, Chinese Zodiac, with personal appearances by the martial-arts film legend and a retrospective of his films.

Below is a schedule of the planned events, courtesy of the Film Society of Lincoln Center:

All screenings will take place at the Film Society of Lincoln Center (West 65th Street between Amsterdam and Broadway). Visit Filmlinc.com for more information.

ARMOUR OF GOD (1986) 97min digital projection
Director: Jackie Chan
Country: Hong Kong
After doing a serious police drama set in Hong Kong, Jackie Chan had the urge to do something lighthearted and international, and so ARMOUR OF GOD was born. A two-fisted, three-footed, ten-knuckled adventure flick, Chan does Indiana Jones, playing a pop star turned treasure hunter Asian Hawk, who takes on a Euro-cult of psychotic monks in an effort to rescue an old friend’s kidnapped girlfriend. It’s a heady blend of his signature style and exploitation trends (including a beat-down by a bevy of blaxploitation beauties), in which Jackie took a life-threatening fall while performing a stunt that halted production for months and required emergency surgery. To this day, he still bears the hole in his head. But that’s all right: this movie was worth it.

ARMOUR OF GOD 2: OPERATION CONDOR (1991) 106min digital projection
Director: Jackie Chan
Country: Hong Kong
One of Hong Kong’s great out-of-control productions, AOG2 went way over budget and way over schedule as Chan and company hopped around the globe indulging Chan’s desire to top himself. Which he does. The result is the biggest and most complex Jackie Chan movie to date, with Asian Hawk’s quest for a cache of Nazi gold resulting in a succession of gigantic setpieces and intricate action, including one of cinema’s great car chases, the destruction of an entire hotel, and a final battle in a wind tunnel. This is the kind of movie that has you goggle-eyed from start to finish.

CHINESE ZODIAC (2012) 107min digital projection
Director: Jackie Chan
Country: Hong Kong
In his 101st movie, Chan resurrects his treasure-hunting Asian Hawk character from the Armour of God franchise and delivers an action spectacle that has broken box-office records in China. Reported to be his final “large-scale action picture” CZ kicks off with Chan being hired to steal 12 antique bronze sculptures, representing the animals of the Chinese zodiac, and repatriate them to China. Like a Saturday afternoon matinee, this colorful, kinetic flick is a live action cartoon for grown-ups, offering manic action scenes, hidden islands, pirate gangs, and funky gadgets galore. Cut down by about 20 minutes by Chan himself for the North American market (trust us, you’re not missing ANYTHING), this is the king of the pop-and-lock saying goodbye to the blockbuster movies that made him famous in funtacular style.

CITY HUNTER (1993) 105min 35mm
Director: Wong Jing
Country: Hong Kong
Directed by Hong Kong’s King of the Box Office, Wong Jing, CITY HUNTER is packed with insane action and ridiculous comedy. The disappearance of a newspaper tycoon’s daughter brings Chan’s easygoing private sleuth and his lovelorn sidekick (Joey Wang) onboard a luxury cruise liner that soon becomes the target of a gang of hostage-taking terrorists. Wong spins this DIE HARD-on-a-boat scenario into a series of outrageous set-pieces, including a deadly card game and a self-referential movie-theater brawl that finds Chan imitating the moves of an onscreen Bruce Lee. Eventually, it goes so far over the top that you can’t even see the top anymore, climaxing with the legendary STREET FIGHTER tribute beat down between Chan and Gary Daniels.

DRUNKEN MASTER 2 (1994) 102min 35mm
Director: Lau Kar-leung & Jackie Chan
Country: Hong Kong
Filmed at the peak of Chan’s prime, sixteen years after his breakout turn in Drunken Master, this transcendent pairing of classic Shaw Brothers director Lau Kar-leung and Jackie Chan resulted in what many claim to be the greatest martial arts film ever made. In this take on the legend of Wong Fei-hung, Chan shares the screen with the great Ti Lung and also Anita Mui, who almost steals the show as his motor-mouthed stepmother. The plot revolves around Fei-hung’s attempts to foil a foreign syndicate trafficking in ancient Chinese artifacts, but the film’s jaw-dropping kung-fu sequences need little explanation. Lush, opulent, and made with no consideration for budget or schedule, it took three months just to shoot the final action scene.

LITTLE BIG SOLDIER (2010) 95min digital projection
Director: Ding Sheng
Country: Hong Kong
The best Jackie Chan movie since 1994’s Drunken Master 2, this is the film in which Chan finally proves he’s a real actor, not just an action star. At 56 he can’t do the death-defying stunts anymore, so in LBS he trades super-sized spectacle for small-scale combat and his best script ever (it took 20 years of development to reach the screen). Set in ancient China, it centers on a farmer (Chan) who’s drafted into the army and winds up accidentally capturing the enemy general. If he can get his unwilling captive back home he’ll earn his freedom, the only catch being that he’s thousands of miles from safety. It’s a heartbreaking and hilarious escapade, and Chan’s camera-ready charisma has never been put to better use.

POLICE STORY (1985) 101min 35mm
Director: Jackie Chan
Country: Hong Kong
Jackie’s first contemporary cop thriller, in which he played a hot-tempered inspector framed for murder by a vengeful drug lord, proved that he was willing to pull out all the stops—from carrying out a bit of slapstick with two telephones to trashing an entire shopping mall. A breathless adrenaline rush full of twisted bumpers and broken ribs, and with what might be a record-high ratio of broken glass per minute, POLICE STORY is viewed by many as Chan’s greatest achievement and a milestone in the Hong Kong canon. Premiering in the U.S. at the 1987 New York Film Festival, it’s been much imitated, but nothing beats the original.

POLICE STORY 2 (1988) 101min 35mm
Director: Jackie Chan
Country: Hong Kong
As dark and sobering as POLICE STORY 1 was light and playful, this sequel is all about the consequences of action. Chan begins the film demoted to traffic duty after his mall-destroying misadventures in Part One. He finds himself unable to protect his girlfriend (Maggie Cheung) from danger, he can’t track down the bad guys to fight them, and his archenemies are more interested in their cancer treatments than in revenge. The spectacular stunts and killer set-pieces are still there—including a climactic duel with a deaf-mute bomber set in a fireworks-laced warehouse—but POLICE STORY 2 feels more like a deconstruction of the cop thriller than anything else Chan’s ever made.

POLICE STORY 3: SUPERCOP (1992) 95min 35mm
Director: Stanley Tong
Country: Hong Kong
Teaming up with Stanley Tong, one of his most reliable collaborators, Jackie turned in this stunning capper to his Police Story trilogy and re-launched the career of Michelle Yeoh in the process. In this installment, intrepid cop Ka-Kui goes undercover with a dangerous drug lord—a set-up that finds Chan breaking a henchman out of prison, posing with an invented family, and finally dangling from a moving helicopter. The action shifts from Hong Kong to Thailand to Malaysia, culminating in a climax spanning rooftop, sky and train that ranks as one of Chan’s finest extended set-pieces. The film was released in the US in a dubbed, recut version titled simply SUPERCOP, featuring a pow-wow, no-holes-barred theme song by the seminal New Wave rock band Devo.

PROJECT A (1983) 101min 35mm
Director: Jackie Chan
Country: Hong Kong
A team-up with his Chinese opera school brothers Sammo Hung and Yuen Biao, this cops-versus-pirates actioner was the movie that transformed Jackie from a martial arts star into a director of transcendent physical comedy. One of the first action movies to be set in colonial Hong Kong, PROJECT A is the first of Jackie’s films to be spiced with outrageous stunts, including a jaw-dropping bicycle chase and a 50-foot fall from a clock tower (inspired by Harold Lloyd’s hour-hand dangle in SAFETY LAST!) that was so terrifying it took Jackie three days to work up the courage to attempt it.

PROJECT A 2 (1987) 101min 35mm
Director: Jackie Chan
Country: Hong Kong
A meticulously crafted Swiss watch of mistaken identities, espionage, and colonial intrigue, PROJECT A 2 may be Jackie’s greatest accomplishment as a filmmaker. Chan keeps four separate subplots whirling through the air with the greatest of ease, while leaving time not just for intense action and groundbreaking stunts, but for some extraordinary non-action filmmaking. No comedy director has ever topped the intricacy of the famous nine-minute scene set in a two-room apartment that takes the conventions of French farce and turns them up to 11.

SNAKE IN THE EAGLE’S SHADOW (1978) 98min 35mm
Director: Yuen Wo-ping
Country: Hong Kong
This is where it all began. Chan teamed with director Yuen Wo-ping (later to serve as action director on CROUCHING TIGER, HIDDEN DRAGON) for this kung fu comedy about a bullied young man working as a janitor at a martial arts school who learns to fight back against his tormentors using a kung fu technique known as “Snake’s Fist”. Soon, the novice starts to develop a strategy of his own—fittingly, since SNAKE IN THE EAGLE’S SHADOW also found Chan himself arriving at what would become his inimitable, career-defining style. The film became Jackie’s first box-office hit, and the first movie to introduce the world to his innovative brand of action-comedy.
(NOTE: dubbed in Mandarin with English subtitles projected live during the screenings)

THE YOUNG MASTER (1980) 106min 35mm
Director: Jackie Chan
Country: Hong Kong
Jackie’s directorial debut was the idea showcase for his martial arts prowess and that of his co-stars—among them his “little brother” from Chinese opera school, Yuen Biao, who appears here alongside Jackie for the first time, and Korean super-kicker Hwang In-Shik. Opening on a high-stakes lion dance competition and closing on a ferocious showdown between Chan and Hwang, THE YOUNG MASTER found Jackie exploring the thin line between kung fu as performance and as life-or-death combat. His first movie for Golden Harvest, the studio which would become his home for the next 20 years, it’s arguably his greatest pure martial arts film.