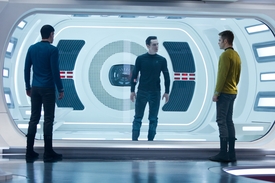 A $12.9 million weekend saw Star Trek: Into Darkness beat out Iron Man 3 for the top spot at the U.K.'s box office. The sci-fi sequel relied heavily on this market to reach its $31.7 million overseas total from the seven territories it opened last weekend. It is the first film to significantly outgross Iron Man 3. A $23,374 per-screen average confirms Star Trek's U.K. release date as a big success. Star Trek: Into Darkness is already set to outperform the total gross for Tom Cruise's Oblivion ($16M) in the U.K. by next weekend.

Iron Man 3 fell 50% from the previous weekend to gross $4.8 million and reach a $48.1 million cume. The Croods kept its strong hold in the market by maintaining a competitive per-screen average of $1,302 in its eight week in release. The animated feature has already grossed $39.7 million.

Meanwhile, in limited release: Mud premiered in 71 screens for a successful $5,171 average. Pedro Almodovar's I'm So Excited held on to a spot in the top ten for the second consecutive weekend. The Spanish auteur's latest has grossed just under $1 million in two weeks. 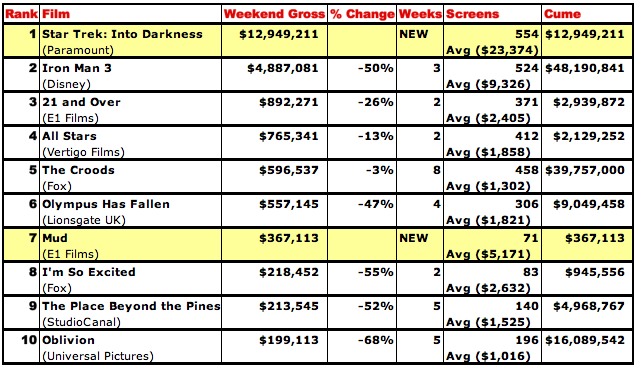