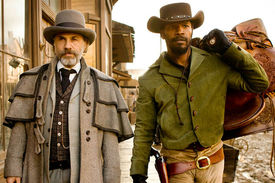 American Dreams in China was the first film to topple the reign of Iron Man 3 in China. The Chinese film grossed $17.02 million over the weekend, the first three days of its release. The weekend release reflects a big draw, outgrossing the $13.4 million weekly total of Iron Man 3. Iron Man 3 has now grossed over $110 million in China, its biggest overseas market. So Young continued to post strong numbers, grossing $9.31 million over its fourth week and reach a $109.52 million cume. Oblivion came in fourth place, grossing $8.62 million in its second week for a $17.99 million cume. The Croods crossed the $50 million mark in China with a $6.27 million weekend that saw its Chinese total go to $51.4 million. Django Unchained fizzled in China, only grossing $2.16 million after its first complete week in release. 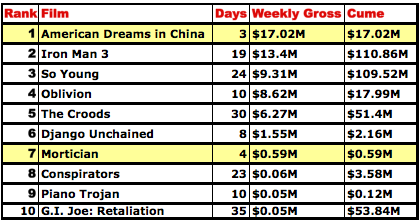