Animated films are as close to a guarantee as you can get from the Mexican box office. The $3.5 million opening weekend for Epic is the latest proof Mexican audiences' fascination for animated films. Epic was the first film to knock down Iron Man 3 from the top spot at the Mexican box office, relegating the superhero film to second place with a $1.9 million weekend and a $46 million total gross. Star Trek Into Darkness fell 45% in its second week to take third place with a $1.4 million weekend. The Star Trek sequel isn't the big ticket in Mexico than it is in other territories but has been outperforming its predecessor over the same time-period in the market. Star Trek Into Darkness has a $5.3 million cume in Mexico. Nosotros Los Nobles, the domestic class comedy with a joint distribution deal with Warner Brothers, had another successful weekend in release, grossing $1.1 million over its eighth weekend. Nosotros Los Nobles is the highest grossing domestic film of all time in Mexico, currently posting a $28.3 million cume. The Call, The Last Exorcism 2, and Dead Man Down all failed to draw any significant interest in their opening weekends. The films didn't see a major release, but their respective per-screen averages might not be enough to maintain a competitive screen count in the coming weeks. 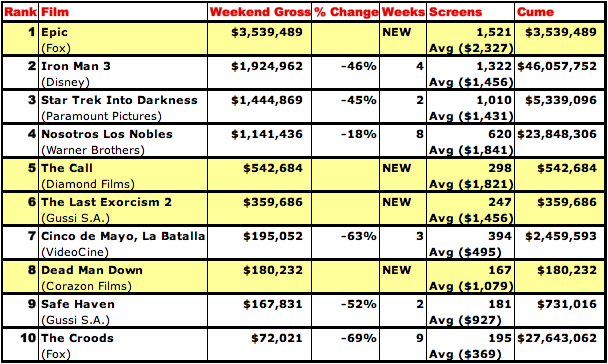