FRANCE: 'Fast 6' is First with $11.3M, 'Only God Forgives' Impresses Despite Cannes Setback

Fast & Furious 6 didn't leave any doubt at the French box office, opening with a big $11.3 million weekend -miles ahead of the other films in the market. The latest Fast & Furious sequel played in 624 screens for a $18,192 average, an important number compared to the 629 screens from Epic's opening weekend. Epic had a $3.4 million debut and $5,471 average. The Great Gatsby made strides towards a $10 million French cume, falling just short of the mark over the weekend after taking in $2.4 million in a market-leading 660 screens. Expect Gatsby to see a steep drop next weekend after a likely decrease in its screen count. Nicolas Winding Refn's latest film was booed at its Cannes premiere, but French audiences were more forgiving with Only God Forgives. The Ryan Gosling vehicle grossed $1.7 million in fourth place, a great number for a specialty feature in a packed summer market. Iron Man 3 saw its weekend gross dip below $1 million for the first time during its fifth week. The superhero movie has grossed $37.9 million and will hope to have enough left in the tank to come out of France with a $40 million cume. 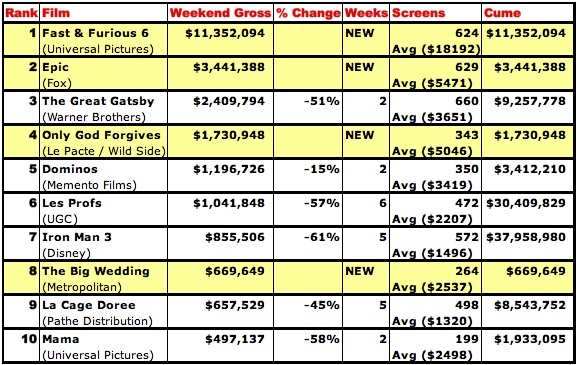