GLOBAL PREVIEW: 'Star Trek Into Darkness' Opens in China, Faces Off Against 'After Earth' in Korea 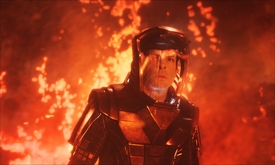 Paramount's overseas release strategy for Star Trek Into Darkness is a long-range bet, spanning out throughout the summer on a weekend-by-weekend basis in each territory. The strategy has proved successful so far; Paramount's approach to the global market takes into consideration the nuances of each territory in an attempt to get the most out of the film by working around the summer's packed release schedule.

Star Trek Into Darkness avoided the day-and-date juggernaut release of Fast & Furious 6 last weekend with no new openings. This week brings three more territories into the fray: Poland, China, and South Korea. The Chinese premiere could potentially bring a welcome boost for the sci-fi sequel. Chinese audiences have responded to Tom Cruise's Oblivion with a $22.29 million gross after 17 days in release. Oblivion never had it easy in China, uncomfortably sandwiched between the blockbuster premiere of Iron Man 3 and the rescheduled opening of Django Unchained. While Oblivion's take in China does not match the $50 million-plus performances from The Croods or G.I. Joe: Retaliation, it does present the potential for a high-budget sci-fi film to succeed against difficult odds.

It's ironic that Star Trek Into Darkness will avoid release traffic in China to instead find it in South Korea this weekend. South Korea has two of the summer's biggest sci-fi spectacles going up head-to-head against each other with the release of After Earth. Sony will be rolling out After Earth overseas throughout June but has selected South Korea as the only market to go day-and-date with North America. It's a costly decision for both Paramount and Sony, as they look to split their take in the world's seventh largest film market outside of North America.

Gatsby Expands to Mexico and Australia.

No Fast & Furious leaves the Australian market for the taking this weekend, and Warner Brothers is ready to take it with the release of The Great Gatsby. Gatsby's closest competitor will be The Hangover Part III, coming off a huge $9 million weekend in Australia. Word of mouth might prevail in the battle, considering the weak reception that has hit the last two Hangover films.

The Great Gatsby will have to rely on Leonardo Di Caprio's star-power in Mexico to turn an unfamiliar property into a hit for the local audience. Gatsby also benefits from enough breathing room in the Mexican market to be able to make a splash. Mexican audiences have shown their loyalty for hold-overs, however, sticking by more action-adventure and family-oriented fare after their opening weekends. Gatsby will likely come out on top in Australia, but might come up short in Mexico with the continued success of Fast & Furious 6 and Epic, not to mention the premiere of Now You See Me.

The Hangover Part III will see its first major expansion, opening in key markets like Brazil, France, Germany, Italy, and Spain. North American numbers have been disappointing for the comedy, but a solid $19.2 million performance from three overseas markets last weekend raise the possibility that the overseas market can mitigate the film's domestic shortcomings. That $19.2 million came from English-speaking territories, however, and its success in other overseas markets is anything but guaranteed. Expect the film to take the top spot in Brazil, where a strong marketing campaign and few comedy options can see it dethrone Fast & Furious 6 for first place. The Hangover Part III will compete against the opening of Epic in France and Italy, but shouldn't be affected directly by the animated film.

The Purge Premieres in the U.K.

The Purge will open in the U.K. this weekend, a week ahead of its North American release. The early release date can give The Purge a push in the United Kingdom, going up against a Fast & Furious 6 that fell 60% in its second week and a Hangover 3 that can suffer a bigger slide through negative word of mouth. Star Trek Into Darkness, The Great Gatsby, and Iron Man 3 all fell to mid-table positions last weekend, giving The Purge the space it needs to open big in its first market.

Tags: Global, Star Trek Into Darkness, The Great Gatsby, After Earth, Now You See Me, The Hangover Part III, The Purge, Epic