NORTH AMERICA: 'Now You See Me' Edges Past Disappointing 'After Earth', 'Fast 6' Repeats At #1 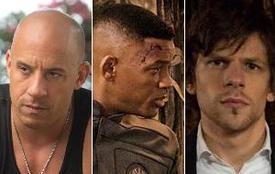 Sunday Update: Universal reports that Fast & Furious 6 is headed for a solid $34.5 million sophomore frame. That will put the action extravaganza's North American total at $170.4 million.

Summit estimates that Now You See Me is headed for an excellent $28.05 million debut. The magic-themed flick snagged an impressive A- CinemaScore rating. Expect Now You See Me to hold up well in the weeks to come.

Sony has After Earth pegged at $27 million for the weekend. This marks a new low for star Will Smith. Even Wild Wild West, a film widely regarded as the weakest of Smith's career, managed $27.7 million in 1999--and that's without adjusting for inflation.

Fox is now estimating $16.4 million for Epic, which represents a respectable 51% drop from last weekend.

The Hangover Part III will drop at least 60% this weekend. Estimates from WB put the comedy on pace for $15.9 million. Moviegoers simply aren't responding to this trilogy-capping dud.

Saturday Update #2: Sony's After Earth grossed $9.8 million on opening day. The film is on pace for a disappointing $27.3 million debut weekend. AE really needs to step it up overseas now in order to make up for this lackluster debut. It's important to remember that while star Will Smith's drawing power might be waning in North America, he remains one of the most trusted stars globally. Case in point: Men In Black 3 made $446 million overseas vs. $179 million in North America.

While Smith should be able to bounce back, it will be difficult for director M. Night Shyamalan to shake off this failure. Shyamalan's reputation has been in steady decline ever since The Village was hit with a wave of audience scorn back in 2004. Shyamalan has been talking about sequels to Unbreakable and The Last Airbender in interviews while promoting After Earth, but it might be an uphill battle for him to get anything made at a major studio now.

AE will also hurt the budding career of Jaden Smith. Even a tweet from Jaden's pal Justin Bieber couldn't help After Earth:

Everyone go see #AfterEarth this weekend. @officialjaden we got u. #supportyourfriends

Now You See Me took in $10.05 million on Friday, according to Lionsgate. The flick is on pace to upset and grab second place for the weekend, although it could be a close finish with After Earth. Count this as a major victory for Lionsgate. The distributor successfully made their ensemble thriller stand out in a market full of more high-profile efforts. It's clear that with the success of The Great Gatsby and Now You See Me that moviegoers are hungry for alternatives to action tentpoles.

Universal reports a $10.5 million second Friday for Fast & Furious 6. That puts the film on pace for another #1 finish this weekend with a projected $35 million, down 64% from last weekend. A steep drop is nothing to be overly concerned about considering that the film shattered expectations last weekend. Overseas expectations remain bullish: F&F 6 should have no problem hitting $500 million outside of North America.

Fox's Epic should take in $15.7 million this weekend following its second Friday gross of $4.15 million. The animated flick continues to be a solid alternative for families with young children. Epic should do steady business right up until the release of Monsters University on June 21.

The Hangover Part III took in $5.23 million for its second Friday. The second sequel is on pace for a dismal $15.5 million sophomore frame. WB will be looking to overseas grosses to make up for the underwhelming domestic reception.

Saturday Update: After Earth did surge a bit on Friday night, and it's now looking like it will end up in the range of $25 million-$28 million. Now You See Me is set for around $22 million-$24 million.

Friday Update #3: Revised numbers are helping out After Earth and Now You See Me. AE is now looking at $21 million-$22 million, while Now You See Me could hit $24 million.

Friday Update #2: Sources tell BoxOffice that early numbers are not promising for After Earth. The sci-fi flick could end up with around $7 million on Friday, which means it might struggle to hit even $20 million during its debut frame. AE will need to do well with families on Saturday if it wants to post a stronger opening weekend. These are VERY early numbers, so a surge is still a real possibility.

Now You See Me should hit $7 million on Friday, and it's looking at a $20 million start. That would be a solid result for the magic-themed flick considering that the market is full of spectacle films right now.

Fast & Furious 6 will have no problem repeating as the #1 film this weekend. The same sources tell us that it is "way out in front." No numbers are available yet.

Friday Update: Sony reports that After Earth made $1 million from Thursday, 9 p.m. preview shows at 3,401 locations. That's a respectable start for Sony's sci-fi flick. The real concern now is going to be whether or not audiences agree with the harsh reviews from professional critics.

Lionsgate estimates that Now You See Me took in a solid $1.5 million from Thursday preview shows at 2,925 locations--nearly 500 less than After Earth. Now You See Me benefited from having shows at 7 p.m. and 9 p.m., while After Earth was only playing at 9.

Tags: Now You See Me, After Earth, Fast & Furious 6