Star Trek Into Darkness led the Chinese box office in its first week in release, grossing $25.87 million in six days. It's not the blockbuster figure that Paramount might have been hoping for the sci-fi sequel, but is still more than the $23.49 million cume that Oblivion has grossed after 24 days in release. Meanwhile, Iron Man 3 continues to reach blockbuster milestones, reaching a $120.6 million cume in China after 33 days.

Domestic film American Dreams in China continued its healthy run in the box office, grossing $17.98 million last week for a $69 million cume. It is about half of what runaway success So Young has grossed, which is currently posing a $114.71 cume after 38 days.

Children's Day was celebrated in China on June 1st and brought about a number of new animated films for the demographic. Happy Little Submarine 3 - Rainbow Treasure, apart from being a leading contender for the best film title of the year, opened to a weekend gross of $6.82 million. The Adventures of Sinbad 2013 enjoyed a $4.64 million weekend, and Kui Ba 2 grossed $2.93 million over the holiday weekend. The Croods kept its strong hold-over performance in China by grossing $5.73 throughout the week, reaching a successful $62.37 million cume. 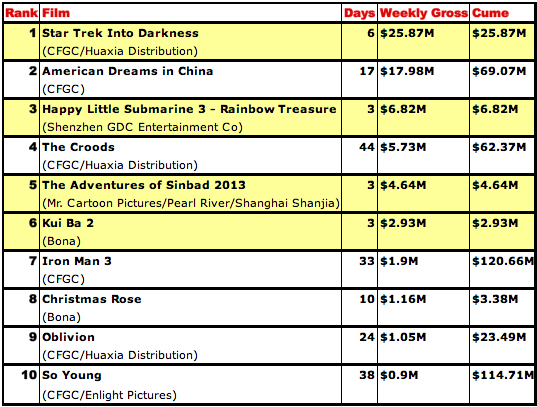