'Man Of Steel' Outpacing Other Summer 2013 Blockbusters On Fandango 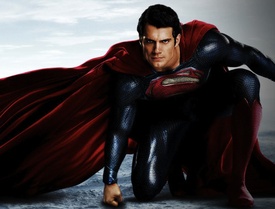 Fandango tells BoxOffice that Man of Steel is outpacing all other Summer 2013 releases at the same point in the release cycle. That could be VERY good news for the Warner Bros. release.

The superhero flick is today's top selling film on Fandango, putting it ahead of Friday's new releases: The Purge and The Internship.

BoxOffice is currently forecasting a $112 million opening for Man of Steel, but that could change by next week. Even $112 million would be a huge success for a series reboot. Fans tend to approach new versions of familiar stories with some caution. For instance, it's very import to remember that Christopher Nolan's Batman Begins opened to a modest $48.7 million in 2005. Of course, glowing word of mouth quickly spread and it helped launch the property to new heights.