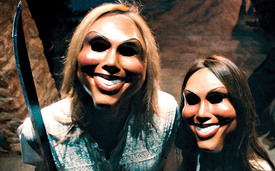 With a weekend take of $11.43 million, Star Trek Into Darkness has grossed $199.87 million to date and will have to wait until today to surpass the $200 million mark after all.

Sunday Update: The Purge easily led the way at the box office this weekend with an estimated $36.4 million. The ultra-low budget R-rated thriller from Universal absolutely blew past pre-release expectations, which had ranged more in the neighborhood of $20 million to $25 million. There is no doubt that The Purge was helped out tremendously by the very high volume of online discussion the film generated in the weeks leading up to its release. The Purge opened 73 percent stronger than the $20.998 million debut of 2008's The Strangers and 102 percent stronger than the $18.01 million start of last year's Sinister (which also starred Ethan Hawke).

The Purge was quite front-loaded this weekend, which is commonplace with most horror films and thrillers that perform well at the box office. After opening with $16.8 million on Friday (which included an estimated $3.4 million from late night Thursday shows), The Purge grossed $10.4 million on Saturday and is estimated to gross $9.2 million on Sunday. That places the estimated opening weekend to Friday ratio for the film at 2.17 to 1. The audience breakdown for The Purge skewed towards female moviegoers (56 percent) and towards moviegoers under 25 (56 percent). The Purge received a C rating on CinemaScore, which is respectable given the film's genre. Given the film's strong performance and low overall cost, it should only be a matter of time before we see a sequel to The Purge.

Holding up very nicely this weekend was Now You See Me. The ensemble thriller from Lionsgate placed in third with an estimated $19.5 million. That represented a decline of just 34 percent from last weekend's already stronger than expected opening weekend performance. Now You See Me continues to exceed expectations with a ten-day take of $61.37 million. That places the film an impressive 31 percent ahead of the $46.77 million ten-day take of 2008's 21 (which fell 36 percent in its second weekend to gross $15.34 million). Now You See Me will hope to continue to hold up well going forward, though doing so will be much tougher next week with both Warner's Man of Steel and Sony's This Is The End entering the summer marketplace.

The Internship debuted in fourth place this weekend with an estimated $18.1 million. The PG-13 comedy from Fox opened towards the higher end of expectations (with word of mouth from last week's sneak previews having likely having helped the film's cause a bit). However, this weekend's performance was nonetheless a lackluster one given that the film was built around the reuniting of Wedding Crashers co-stars Vince Vaughn and Owen Wilson. The Internship opened 47 percent softer than the $33.90 million start of 2005's Wedding Crashers, but did manage to open 42 percent ahead of the disastrous $12.75 million debut of last year's The Watch. Clearly, neither Vaughn nor Wilson is anywhere near the type of box office draw that either used to be.

The Internship took in $6.50 million on Friday (an opening day take that was boosted by an estimated $800,000 from late night Thursday shows), grossed $6.63 million on Saturday and is estimated to gross $4.98 million on Sunday. The estimated opening weekend to Friday ratio for the film stands at 2.78 to 1. The Internship received a somewhat encouraging B+ rating on CinemaScore, though that may not mean as much as it normally would going forward with direct competition in the form of This Is The End arriving on Wednesday.

In other domestic box office news, Paramount's Star Trek Into Darkness surpassed the $200 million domestic mark after grossing an estimated $11.7 million this weekend. Meanwhile, Warner's The Hangover Part III surpassed the $100 million mark after grossing an estimated $7.38 million for the frame. Respective total grosses stand at $200.14 million for Star Trek Into Darkness in 25 days and at a much poorer than expected $102.37 million for The Hangover Part III through 18 days.

On the platform front, Roadside's Much Ado About Nothing was off to a solid start with an estimated $183,400. The Joss Whedon directed adaptation of the Shakespeare comedy earned a per-location average of $36,680 from five locations. Much Ado About Nothing is scheduled to receive a major expansion on June 21.

Saturday Update: Universal reports that The Purge took in $16.7 million on Friday (including the $3.4 million from Thursday night shows). The low budget thriller is on pace to rake in close to $36 million for a first place debut weekend, exceeding even optimistic expectations borne from the film's strong social network activity going into Friday.

On its low budget, The Purge is already profitable--however, its Flixster user score is dropping rapidly (sitting at 59 percent currently). Universal's official weekend projection is $38.4 million, but we're remaining cautious on the film's internal multiplier given the apparent divisive word of mouth and history of genre front-loading.

The Internship grabbed $6.55 million yesterday, putting it on track for an $18.5 million weekend. The opening comes as somewhat of a disappointment following the heavy ad-placement of the Fox comedy, not to mention the past successes of stars Vince Vaughn and Owen Wilson.

Meanwhile, Now You See Me continues to exhibit its strength with another $6.05 million on its second Friday. The magician thriller should come close to $20 million for a strong second place finish in its sophomore weekend.

Friday Update #3: The latest Friday numbers indicate that The Purge could hit $32 million during its debut frame. If the horror flick surges late on Friday then $35 million could definitely be a reality.

The Internship is headed for a little more than $20 million.

Check back on Saturday morning for official studio figures.

Friday Update #2: Sources tell BoxOffice that The Purge could hit $30 million or more during its debut frame. Universal's horror flick looks poised for $12 million-$14 million on Friday based on early reports. If moviegoers opt for late shows of The Purge--a strong possibility given its genre--then the Friday number could end up being even stronger. This marks a huge win for Universal coming off the massive success of Fast & Furious 6. (Don't forget they also have Despicable Me 2 coming in July.) Moviegoers are clearly very hungry for films that don't fit into the typical action tentpole mold--see also The Great Gatsby and Now You See Me--and The Purge is filling that need. The Purge's Facebook page is adding fans at a rapid rate: more than 140,000 people have liked the page since that week. Compare that to the 64,000 or so that Man of Steel added during the same time and you get an idea of how strong The Purge's online following is becoming. If Universal plans on doing a sequel--an idea that's bound to get plenty of attention after this weekend--they will have plenty of built-in fans to market it directly to.

Early Friday numbers indicate that The Internship is headed for $7 million on Friday and an opening of around $18 million-$19 million. Stars Owen Wilson and Vince Vaughn simply waited too long to join forces again after the success of 2005's Wedding Crashers, a $285 million global sensation that people quote religiously to this day. It'll be hard for the comedy to rebound from an underwhelming debut since Man of Steel and This Is The End will hog the spotlight next weekend.

Friday Update: Universal reports that The Purge earned $3.4 million at Thursday 10 p.m. late shows and Friday midnights from 1,751 theaters. That's far ahead of the $1.8 million that Evil Dead managed from 10 p.m./midnight shows earlier this year. Evil Dead opened to an impressive $25.8 million during its debut grame. Meanwhile, The Internship pulled in a modest $800K.

Fandango sent out a release this morning touting the The Purge's strong sales:

"The Purge" is Fandango's top-selling horror movie of the year so far, in terms of pre-sales (selling more advance tickets than the company previously sold for other 2013 horror hits like "Mama" or "Evil Dead").

"The Purge" represented 54% of sales on Thursday on the site and mobile apps.

"The Purge" definitely struck a nerve with moviegoers, with social media buzz that's been off the charts," says Fandango President Paul Yanover. "It has been our top-selling horror movie of the year so far, in terms of pre-sales."

The movie is not just attracting horror buffs to the theater; 41% of survey respondents claim it's one of the few horror films they plan to see this year.

Tags: Fast & Furious 6, The Purge, The Internship, Now You See Me