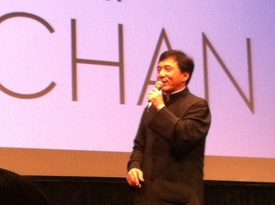 Rush Hour fans are more likely to see a Jackie Chan musical before a fourth entry of the popular action franchise. Chan winced at mentioning the possibility of Rush Hour 4 during a conversation preceding the screening of his latest film, Chinese Zodiac, in New York. Chan held a public conversation at the Film Society of Lincoln Center preceding the screening. The actor attended the event to receive the Lifetime Achievement Award from the New York Asian Film Festival.

"When I go to Hollywood, I don't get to do what I want to do," confessed the martial arts legend. "They always say: 'Hey, Jackie - Rush Hour 2! Rush Hour 4!"

Chan's last live-action Hollywood film was 2010's The Karate Kid remake, co-starring Jaden Smith. Chan explained that the role interested him because it showcased his acting abilities, a factor he believes is overlooked when receiving offers for Hollywood films. Jackie Chan has instead been focusing on his filmmaking career in his native Hong Kong, where he can produce projects on his own terms for a bountiful Asian film market. Chinese Zodiac is Jackie Chan's 101st entry in a lengthy filmography that has traversed the world since the late 1970s. Chinese Zodiac was a massive hit in China, the world's second most important film market, grossing an estimated $140 million. With a direct line to mainland's China audience, there is no rush for Jackie Chan to return to Hollywood for a project he doesn't believe in.

"Scripts, even today, are the same as forty years ago," expressed Chan, showing disappointment with the Hollywood offers he's received. "They only write: 'Funny fighting,' 'Serious fighting, 'Spectacular fighting!' Then I look at the writer and say, 'Yeah, spectacular, can you write a spectacular script?'"

The main difference in what Jackie Chan describes as the "Hong Kong" action-film production style begins at the script stage. "It's not like an American film where you have a whole script that you fill up with action. [In Hong Kong] we have all action that we fill up with script."

The 59-year-old actor has spent the bulk of his time producing films in Hong Kong, where he says the production style better suits the sensibility of his films. According to Chan, screenplays are rarely completed when films go into production. Rewrites are common and the scripts are closely guarded by the producers, with actors only receiving that day's pages worth of work without having read the entire screenplay. This has been the case for decades in Hong Kong, explains Chan, where shoots are streamlined and films are made as quickly and cheaply as possible. If the completed screenplay where to be distributed among production members, the film runs the risk of having the script leak and ultimately having a carbon-copy of the film hit theaters before the production is completed.

Jackie Chan's recent career decisions have been more geared to include social messages and positive role models. The result might be well intentioned but doesn't exactly work for Chinese Zodiac, which is weighed down by facile inspirational messages that come off as awkwardly preachy. It represents an improvement in Chan's own self-evaluation, as the actor shared with the audience at the Film Society of Lincoln Center. "I look back on Drunken Master II and think to myself, why am I telling people to drink and fight?"

Despite his reticence over another Rush Hour sequel, Jackie Chan did admit to being open to hear pitches for another installment. Next up for the actor is a role in the action-star anthology The Expendables 3. Instead of speaking about his return to Hollywood during a press conference at the Hong Kong Economic and Trade Office, Jackie Chan spent several minutes excitedly promoting an in-the-works autobiographical stage musical he is currently developing. The project is to be based on his memoir, "I am Jackie Chan." Jackie Chan had previously mentioned the project in a 2010 interview with Conan O'Brien. The world will have to wait to see if the stage musical is ever realized. If he can sing as well as he can fight, Broadway will have to keep a close eye on Jackie Chan.