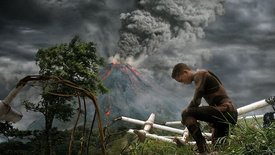 After Earth did just enough to end out on top of the U.K. box office in its opening weekend, nearly doubling the weekend take of The Hangover Part III with a market-leading $3.5 million gross. The $5,202 average from 673 screens was enough to take advantage of a release window that presented little competition; only three other new releases made it into the top ten through limited release.

The Hangover Part III is no less of a blockbuster despite signing off on its #1 spot in its third week. The comedy has grossed a $24.6 million cume in the U.K. Fast & Furious 6 placed third on the podium with a $1.3 million weekend, taking its total gross to $35.3 million.

Epic and The Great Gatsby both brought in $1 million each to place just above the middle of the table. The animated film is riding a number of strong hold-over performances, but it looks like its $17 million cume won't be seeing any significant changes in the coming weeks. Gatsby is celebrating crossing the $20 million mark after four weeks in theaters.

The Purge has been unable to find the same success in the U.K. than it has in North America. The low-budget thriller has grossed $3.4 million in two weeks, more than enough in comparison to its reported $3 million budget, but nowhere near the numbers the film has grossed domestically.

The big story coming from the U.K. is the ongoing success of Star Trek Into Darkness. The sci-fi sequel has grossed $37.1 million of its $176.4 million overseas cume in the United Kingdom. This was the first weekend where the film grossed under $1 million, dropping 52% from its previous frame. The Man of Steel release might push it further down the chart, but it's markets like the U.K. that have been able to allow the latest entry in the Star Trek franchise to outgross its predecessor.

Box Office Results for the United Kingdom. Weekend of June 7-9, 2013 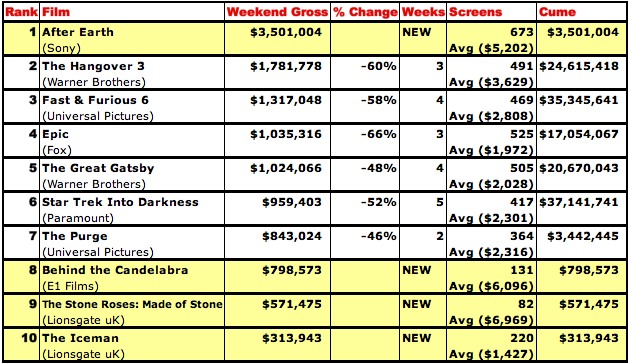