Weekend Preview: Can 'Star Trek Into Darkness' Succeed in Brazil? 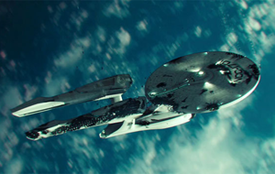 Star Trek Into Darkness opens in Brazil this weekend with its sights set on getting closer to the $200 million overseas milestone. Brazil hasn't been too kind on science fiction in 2013, with Tom Cruise's Oblivion only grossing a $5.9 million cume. After Earth premiered in third place last weekend, scoring a $2.2 million debut that won't get anyone too excited.

The previous Star Trek adventure helmed by J.J. Abrams grossed $1.9 million in Brazil back in 2009. The latest installment has been continuously outperforming the former outing in the franchise, and should already exceed Star Trek's $384.9 million global gross by the weekend. Star Trek Into Darkness has already been a significant improvement overseas for Paramount, bringing in $176.4 million heading into the weekend -nearly $50 million more than Star Trek's final $127.7 overseas tally. Star Trek Into Darkness is looking for a strong push to surpass Oblivion's $191.4 million overseas run and enter the shortlist of 2013 titles to have crossed $200 million abroad.

It's a prime weekend for Star Trek Into Darkness to shine in Brazil. The only other major releases in the country include limited runs of Park Chan Wook's Stoker and Richard Linklater's Before Midnight. As the sole popcorn centered new release to hit multiplexes, Star Trek Into Darkness should be considered a success if it can gross above $3 million in its opening weekend in Brazil.