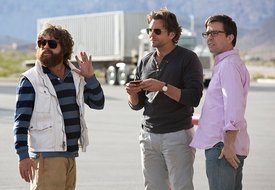 Another big weekend for The Hangover Part III in Germany saw the comedy take the top spot at the box office with a $2.6 million take. The Hangover III's German cume now stands at an impressive $25 million. It is going on a head-to-head race with the weekend's second-place film, Fast & Furious 6, which currently posts a $26.9 million weekend with an additional week of release under its belt. Fast & Furious 6 grossed $1.4 million over the weekend.

Four U.S. films premiered but none were able to break the $1 million mark in their debut. The Purge fared best in the group, posting a competitive $3,311 average across 264 screens. The Purge placed second in the per-screen average category, below first place hold-over The Hangover Part III. The Host came in fifth place with a $702k take from 347 locations. The Place Beyond the Pines placed on the bottom half of the table after a $610k opening weekend in 252 locations. Olympus Has Fallen fell flat in Germany, only managing to gross slightly above the half-million mark in 223 screens.

Star Trek Into Darkness has been a great hit in Germany and is on the verge of breaking the $20 million mark. It is only $65,000 shy from the milestone and should be able to achieve it by next week even if the film doesn't gross enough to stay in the top ten for the seventh consecutive occasion. 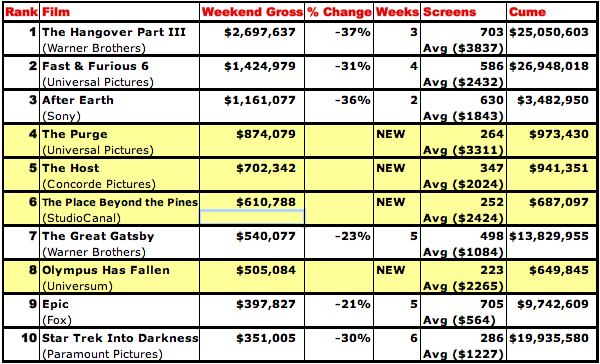 Tags: Germany, The Hangover Part III, The Purge, Fast & Furious 6, The Host, The Place Beyond the Pines, Olympus Has Fallen, Star Trek Into Darkness