RUSSIA: 'Now You See Me' Debuts In First Place; 'After Earth' Continues its Strong Run 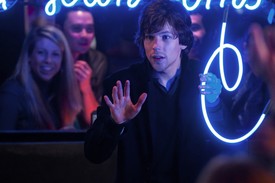 Now You See Me made a big splash in Russia, opening mid-week to a $10.3 million total. The magic caper grossed $8.1 million of that figure over the weekend across 914 screens, leading the market with an impressive $8,935 per-screen average.

The Internship opened in third place with a performance comparable to other recent Hollywood comedies like Couples Retreat, The Other Guys, and Horrible Bosses. The Vince Vaughn and Owen Wilson comedy's $1 million opening weekend won't be considered a disappointment, but stands in stark contrast to the overwhelming success that The Hangover Part III has had in Russia. The last entry in The Hangover trilogy has taken in $16.8 million after three weeks in release.

After Earth fell 64% in its sophomore frame for a $2.7 million weekend. Russia ranks among the best performing markets for the sci-fi film, responsible for roughly 16% of its current $91.1 million overseas gross.

Other Hollywood hits currently in release in Russia include Epic ($14M in 3 weeks) and The Great Gatsby ($16.6M in 5 weeks). 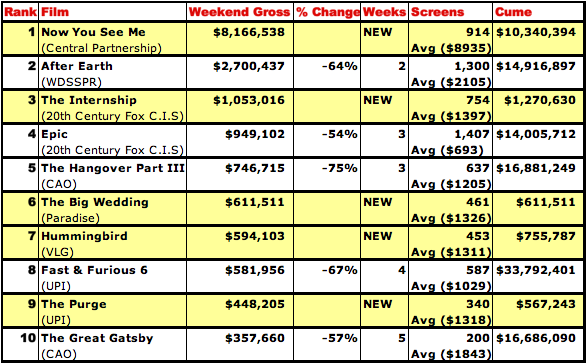 Tags: Now You See Me, After Earth, The Internship, The Hangover Part III, Epic, The Great Gatsby