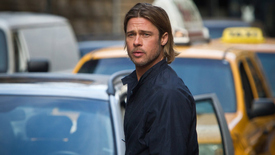 Paramount's World War Z took over 30% of the overseas market after opening across 3,470 screens in 25 territories. The zombie thriller took in $45.8 million from its opening weekend overseas as it plans a major expansion over next couple of weeks.

The film got off to a hot start midweek after Paramount reported promising early numbers for the film's day-and-date global premiere. World War Z took in $3.6 million from North America and added $5.7 million from its first round of overseas markets on its debut, posting a $9.3M worldwide gross for its opening day.

South Korea opened to a robust $1.5 million single-day gross, anticipating a strong showing throughout the weekend. The opening day numbers for World War Z in South Korea are higher than those of Man of Steel ($1.1M), Inception ($941k), and Rise of the Planet of the Apes ($739k).

Australia performed similarly well, posting $1.1 million for the film's opening day. It was a better opening than Inception ($1.1M) and Rise of the Planet of the Apes ($712k). Australia is the only major overseas market where World War Z will be virtually unopposed this weekend, with Man of Steel on deck to premiere on June 27.

World War Z more than doubled the opening day gross of Man of Steel in Argentina, opening on a midweek holiday for $710k. It is the third highest Thursday opening of all time in the territory.