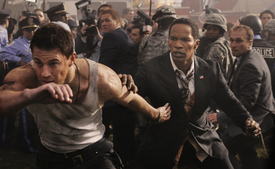 This weekend's global preview begins with a look down under. The start of the winter school holiday brought big numbers in Australia last weekend. World War Z took the top spot, while Despicable Me 2 defeated Monsters University in a head-to-head battle for second place. More new releases are in store for this weekend in Australia; Epic will try its luck against last weekend's animated releases and Man of Steel flies in to steal some of World War Z's momentum.

Despicable Me 2 will try to replicate last weekend's success in Australia as it expands to the United Kingdom, Belgium, France, the Netherlands, Sweden, and French-Switzerland. The animated film won't open in North America until July 4th weekend, when producers will be hoping to go in with a strong early start from the limited overseas release. It won't have too much competition in the U.K. this weekend, with other new releases like This is the End and The East focused on different demographics. France presents a similar release window for Despicable Me 2, where the animated sequel opens against the premieres of The Internship and White House Down.

Man of Steel is on track to cross the $200 million overseas mark this weekend and Australia is primed to be one of the leading markets for Superman's weekend take. This will likely cause a steep drop for World War Z in its second frame, a factor mitigated by the wide expansion of Brad Pitt's zombie epic to more than fifteen territories, including major players like Germany, Italy, Russia, Brazil, and Mexico.

The country specific advertising of World War Z in Russia and Mexico has raised speculation for the film in the market. Russia originally played a big role in the zombie invasion epic, with a reported climactic action sequence set in the country that was excised when Paramount decided to reshoot the film's entire third act. Will Paramount's decision to remove Russia from the final cut of World War Z affect its box office performance in the market? Paramount has already tried to court the overseas box office with its decision to remove any negative references to China in the film. This was done in hopes of salvaging a Chinese release, an attempt done in vain according to The Wrap, which reports that Brad Pitt's latest was turned down by censors.

World War Z is also getting ready for a complicated premiere in Brazil. The nation is currently facing mounting public protests amid social unrest in a country that critics claim has been more focused on building the necessary infrastructure for the 2014 World Cup and 2016 Olympic Games than providing more accessible living standards for its citizens. The first protests were organized around the Confederations Cup soccer tournament, where the host nation's beloved team has packed stadiums while growing crowds assemble in protests outside the gates. The situation in Brazil led to the cancellation of the World War Z premiere screening in Brazil, a decision that also scrapped a personal appearance by Brad Pitt for the event. Complicating matters is the fact that Brazil's national soccer team is slated to play the Confederations Cup Final at the country's Maracana Stadium in Rio de Janeiro on Sunday.

The Heat was a trending topic on Twitter all last week, but the tweets were mostly referring to the Miami Heat's 2013 NBA Championship. The other Heat, the comedy starring Sandra Bullock and Melissa McCarthy, will open day-and-date in over a dozen minor territories this weekend. Melissa McCarthy is coming off a hard time at the overseas box office with her previous release; Identity Thief was a hit in North America but couldn't find similar traction with overseas audiences, ending its run with a $40.5 million cume outside of North America. The most important overseas markets for Identity Thief were Australia ($7.3M), the U.K. ($7.2M), and Germany ($5.4M).

The Heat is Sandra Bullock's third comedy in the last decade, after the 2009 flop All About Steve ($40M Global) and the underperforming Miss Congeniality 2 ($101.3M Global). Fox will be hoping the comedy performs along the lines of the the $120 million overseas total made by Bridesmaids. Melissa McCarthy was featured in a scene-stealing supporting role in Bridesmaids, a film that benefitted from great runs in the U.K. ($37.3M), Australia ($28.9M), and Germany ($8.1M). Those ("big") three markets will be vital for The Heat in its upcoming overseas expansion.

We can't finish a global preview without dedicating time to the latest loud blockbuster seeing a day-and-date release. Roland Emmerich's White House Down will kick off day-and-date with North America in several key markets this weekend. The Sony release will premiere in South Korea and France, hoping for a good start that will help overshadow the $62.1 million overeseas take of Olympus Has Fallen. It shouldn't be a problem for White House Down to outperform the Antoine Fuqua film; White House Down has the distinct advantage of Sony's distribution and marketing power, the sort of financial and institutional support missing from Olympus Has Fallen as it was facing off against Iron Man 3 earlier this summer.

Sony will keep a close eye on the film's performance following the disappointing performance of After Earth in North America. The Will Smith father-son vehicle flopped in North America, currently posting a $57.8 million gross. The numbers have been positive overseas for the post-apocalyptic sci-fi film, but still nowhere near what Sony needs to take pressure off its other releases. After Earth ended last weekend with a $114 million overseas total, expanding to Spain, Denmark, and Turkey this weekend. If White House Down falls flat, Sony's only hope at rescuing a terrible summer will be in the hands of the Matt Damon sci-fi tent-pole Elysium, scheduled for an August release in North America.

Tags: Global, World War Z, White House Down, The Heat, The Internship, After Earth, Man of Steel, Despicable Me 2