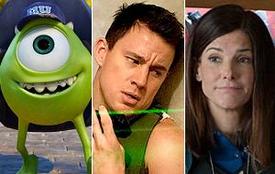 Sunday Update: As was widely expected, Disney's Monsters University held onto first place at the box office this weekend with an estimated second weekend take of $46.18 million. The blockbuster computer animated prequel from Pixar was down 44 percent from last weekend. That represented a very strong second weekend hold for a high-profile animated film released at this time of year. In comparison, 2011's Cars 2 fell 60 percent in its second weekend to gross $26.27 million, while 2010's Toy Story 3 fell 46 percent to take in $59.34 million.

Monsters University is clearly being aided by strong word of mouth and in all likelihood also received an added boost this weekend from moviegoers who wanted to catch the film before Universal's highly anticipated Despicable Me 2 enters the marketplace this coming Wednesday. Monsters University has grossed $171.01 million in ten days, placing it 46 percent ahead of the $117.20 million ten-day start of Cars 2 and 25 percent behind the $226.89 million ten-day take of Toy Story 3.

Fox's The Heat debuted in second place this weekend with an estimated $40.0 million. The R-rated comedy starring Sandra Bullock and Melissa McCarthy exceeded expectations (which were already high heading into the weekend) and performed quite well given the film's modest price tag for a high-profile summer release. The teaming up of Bullock and McCarthy was obviously the key driving force in the film's success, as both actresses continue to display very strong drawing power at the box office. The Heat debuted 19 percent stronger than the $33.63 million debut of 2009's The Proposal and 16 percent ahead of the $34.55 million start of this year's Identity Thief.

The Heat took in $13.6 million on Friday (which includes an estimated $1 million from late night shows that began at 10 p.m. on Thursday), increased 6 percent on Saturday to gross $14.35 million and is estimated to fall a slim 16 percent on Sunday to take in $12.05 million. That places the film's estimated opening weekend to Friday ratio at 2.94 to 1, which is very healthy since films aimed at female moviegoers tend to be more front-loaded towards Friday in general during the summer months. Given the recent past box office performances of films starring Bullock or McCarthy, it is very likely that The Heat will hold up well going forward. The film's A- rating on CinemaScore is also an early encouraging sign.

On the other end of the box office spectrum this weekend was Sony's White House Down. The pricey action film starring Channing Tatum and Jamie Foxx debuted in fourth with an estimated $25.7 million. White House Down opened below pre-release expectations (the film had been expected to open right alongside The Heat) and debuted an especially disappointing 15 percent softer than the $30.37 million start of this year's similarly themed and much less expensive Olympus Has Fallen. In addition to arriving on the scene after Olympus Has Fallen, White House Down clearly isn't being helped out by the stronger than expected performances of both The Heat and World War Z. It remains to be seen whether or not the poor start for White House Down could be a good sign for Disney's The Lone Ranger when it enters the marketplace on Wednesday.

White House Down opened with $9.0 million on Friday (which includes an estimated $1.35 million from late night shows that began at 7 p.m. on Thursday), increased 3 percent on Saturday to take in $9.3 million and is estimated to slide 20 percent on Sunday to gross $7.4 million. The film's estimated opening weekend to Friday ratio stands at 2.86 to 1. Like The Heat, White House Down did register a promising A- rating on CinemaScore. White House Down could receive some short-term help in the next week from the upcoming Independence Day holiday.

Paramount's World War Z was able to hold off White House Down to place in third with an estimated $29.8 million. The expensive Brad Pitt vehicle fell 55 percent from last weekend's stronger than expected debut. While this weekend's decline was significant, it was still solid for a film with horror elements and given the new competition from both The Heat and White House Down. World War Z has grossed $123.72 million in ten days, placing it a strong 38 percent ahead of the $89.37 million ten-day start of last year's Prometheus (which fell 59 percent in its second weekend to gross $20.71 million).  World War Z has already nearly out-grossed the $126.48 million final domestic take of Prometheus.

Warner's Man of Steel rounded out the weekend's top five with an estimated $20.82 million. The blockbuster superhero franchise re-launch has stabilized a bit as of late, but was still down 50 percent from last weekend. Despite the lackluster holding power thus far, Man of Steel has already grossed $248.66 million to date domestically. That places the film 30 percent behind the $353.94 million 17-day take of last year's The Dark Knight Rises. Like White House Down, Man of Steel will hope to receive some help this week from moviegoers looking for an option for Independence Day.

In other box office news, Lionsgate's Now You See Me surpassed the $100 million domestic milestone this weekend after grossing an estimated $5.5 million for the frame. The surprise hit ensemble thriller was down a healthy 30 percent from last weekend and has grossed $104.68 million in 31 days. Sony's This Is The End also continued to hold up well this weekend. The ensemble comedy fell 35 percent to gross an estimated $8.7 million. This Is The End has grossed $74.68 million in 19 days, which means it has now overtaken the pace of 2008's Pineapple Express, which grossed $73.78 million through 19 days.

Saturday Update: Fox reports that The Heat grabbed $13.6 million on Friday. While that is a significant drop from earlier estimates, it nonetheless represents a solid opening day figure for what amounts to the fourth major comedy already released this summer. The rising star success of Melissa McCarthy and lack of summer films aimed toward women helped make this stand out to audiences. BoxOffice is projecting a $36.75 million opening weekend.

Monsters University took in another $14.28 million yesterday, down just 53 percent from its opening day last week. With no new kiddie-centric competition around until next week's Despicable Me 2, the Pixar sequel is taking every advantage of the market right now. We're projecting a healthy $47.6 million sophomore weekend.

White House Down finished Friday with an estimated $9 million haul, which is somewhat underwhelming considering the star power of the movie. The glut of action films, competition in general, and this year's Olympus Has Fallen likely stole a lot of the its thunder. The opening day represents the lowest for a wide release Roland Emmerich film since 2000's The Patriot. We're projecting a $24.75 million fourth place finish this weekend.

Friday Update #3: It now looks like The Heat is headed for as much as $19 million on Friday. Fox's comedy could hit $50 million this weekend, but $47 million-$48 million seems more likely. The Heat will end up much closer than expected to Monsters University, which looks to be on pace for at least $50 million. Monsters University will obviously enjoy a healthy Saturday as more families flock to see it.

White House Down could hit $9 million on Friday. The action flick looks poised for an underwhelming $25 million.

Friday Update #2: Sources tells BoxOffice that The Heat is headed for as much as $18 million on Friday, which puts it on pace for a debut frame of around $45 million or so. Unfortunately, it won't be enough to topple Monsters University which we're told is out in front by a healthy margin.

The Heat validates the need for more female-friendly movies in the marketplace. Women are usually woefully neglected during the summer months, so hopefully the success of Fox's comedy will help change that. Director Paul Feig is now the go-to guy for comedies aimed at women. Feig struck gold in 2011 with Bridesmaids, a $289 million global hit.

Co-star Melissa McCarthy is definitely at the height of her drawing power right now. Earlier this year, McCarthy helped Identity Thief to a healthy--and very surprising--$175 million global haul. The strong performance of The Heat also continues Sandra Bullock's comeback. Bullock will appear later this year in Gravity, a sparse sci-fi flick that will need every ounce of the combined star power of Bullock and co-star George Clooney in order to be successful.

White House Down is looking at $8 million-$10 million on Friday, which will put it close to $27 million. That's an underwhelming debut for a union of Channing Tatum and Jamie Foxx. It's also low for director Roland Emmerich, whose return to big-budget action after the Shakespeare-themed Anonymous should have produced healthier results. The strong performance of Man of Steel and World War Z over the last two weeks is likely the main cause of White House Down's troubles. Both of those films grabbed the attention of key male demos that Sony needed to show up for WHD.

That's definitely an underwhelming start for the action flick from director Roland Emmerich (2012, The Day After Tomorrow), but it's not cause for panic. Non-franchise films sometimes struggle to rope in moviegoers for early shows.

Based on these early grosses, it looks like Monsters University will indeed repeat as the #1 film in North America. White House Down and The Heat will both do steady business, but they are clearly not strong enough to topple the Disney/Pixar juggernaut.