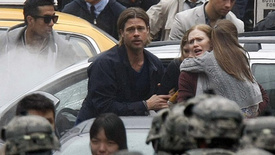 The protests began outside the stadiums and the world was introduced to a side of Brazil that ran counter to the effusive street parties that adorn the country's tourism commercials. The Brazilian passion for soccer is well known to the world, but the chanting on the streets took a different tone as the country kicked off the 2013 Confederations Cup tournament. The tournament is organized by FIFA, soccer's international governing body, and represents a sort of competitive dress rehearsal to next year's larger scale World Cup.

Millions of dollars have been poured into Brazilian infrastructure as the country prepares to host the 2014 World Cup and Rio de Janeiro ramps up the preparations for the 2016 summer Olympic Games. The original protests around the Confederations Cup were focused on recent price hikes on public transportation but have evolved into a much wider forum for social unrest. It hasn't had a direct effect on the soccer tournament, where the Brazilian national team continues to fill stadiums on their run to the finals. But what has it meant for the Brazilian box office?

The filmgoing public stayed away from cinemas during the first week of soccer and protests in a paltry weekend that only featured one major release: Star Trek Into Darkness. Last weekend's release of Monsters University helped reinvigorate the box office, drawing a $3.5 million debut. Domestic comedies once again proved popular as well, with Minha Mae E Uma Peca opening with a $2.1 million weekend.

New releases will have to once again compete with protests and soccer, including the Confederations Cup final: a dream match between powerhouses Brazil and Spain. Soccer and protests are headed to their biggest weekend of the summer just as Paramount is preparing to unleash World War Z to the Brazilian public. The film's Brazilian premiere, including a personal appearance by Brad Pitt, was cancelled earlier this week due to the country's protests. World War Z is poised to take the top spot at the box office, but a packed weekend away from the movie theaters will likely affect its overall potential out of the gate.

Other new releases this weekend include limited releases of Pedro Almodovar's I'm So Excited and Portuguese festival favorite Tabu. Scary Movie 5 will try to sneak in as many screens as it can, trying to draw viewers away from the popular success of The Hangover Part III.