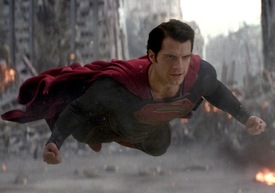 Man of Steel broke the $500 million mark at the global box office this weekend. The Superman reboot has earned $248.7 million in North America and $271.7 overseas for a worldwide total of $520.4 million.

The film posted the largest June opening of all time in North America, going on to take overseas territories by storm. It has also posted great numbers on IMAX, where Man of Steel has grossed $27 million on North America and $18.9 million overseas for a worldwide IMAX total of $45.9 million. The overseas premieres aren't over yet for Superman, with Brazil and Japan still on the horizon.

"We're so excited by the international response to the film and congratulate Zack [Snyder] and everyone involved in the movie on reaching this milestone," said Warner Bros. Pictures President of International Distribution, Veronika Kwan Vandenberg, in an official statement. "We look forward to bringing the film to the rest of the world in the weeks ahead."

Half of the film's 50 territories are new for Brad Pitt's zombie epic. Russia performed the best out of the lot, contributing $12.3 million of the film's $70.1 million overseas take in new markets. The debut marks Brad Pitt's biggest debut in the country and it's Russia's biggest non-franchise opener of the year.

WWZ took over Mexico with $7.9 million, Germany with $7.6 million, and overcame a tough weekend in Brazil to become the South American country's biggest opening weekend for Paramount and Brad Pitt with a $4 million debut. The total tally for World War Z in new territories came to $43.6 million. Comparatively, Inception only managed to take in $26.4 million from its debut in the same territories, while Rise of the Planet of the Apes and Prometheus took $23.5 million and $26.5 million respectively in their own openings.

South Korea was the strongest holdover overseas market, dropping a mere 24%for a $7.7 million take in its second consecutive weekend at the top spot. World War Z has grossed a total of $21.3 million in South Korea. The U.K. dropped 39% for World War Z, bringing in $4.2 million over the weekend to raise its total to $15.5 million. The film reached a $10.6 million total in Australia after bringing in $3.1 million over the weekend.

It's a packed slate of animated films at the global box office, with releases from Fox, Disney, and Universal. Despicable Me 2 is off to a hot start overseas. The animated sequel is playing in seven territories ahead of its July 3 North American release, already posting an impressive $50 million head start. The film beat out Monsters University in a head-to-head battle in its Australian debut last weekend, setting the stage for this weekend's expansion to six additional territories. The minions took the top spot in five of those territories, only getting second place behind Man of Steel in its Sweden premiere and sophomore frame in Australia. Despicable Me 2 is posting a better performance in these seven territories than its predecessor and titles like Kung Fu Panda 2, The Croods, Shrek Forever After, and the Madagascar sequels.

Despicable Me 2 took in $15.7M from the U.K. and Ireland over the weekend, reaching a $23.3M total in the market when combined with last week's previews. It is Universal's biggest opening weekend of all time in the market, grossing nearly four times the $5.9 million brought in by the original Despicable Me.

Monsters University broke the $300 million mark in the global box office after only two weeks in release. Pixar's latest is currently out in 37 territories, about half of its overseas scope, grossing a total of $129.3 million outside of North America.

Epic rounds out the animated films currently in the market, adding $5.1 million from 48 markets over the weekend to reach a $130.4 million cume. Epic couldn't compete against the minions or monsters in Australia, opening in fourth place with a respectable $2.7 million debut. Spain and South Korea are the only two remaining major markets left for the animated film. Epic has grossed $233.4 million worldwide.

White House Down had a soft day-and-date opening, putting up a lower-than-expected $32.5 million opening weekend worldwide. Roland Emmerich's action film scored an A- with North American audiences but only grossed $25.7 million in its debut. The overseas numbers added $6.8 million from mostly minor territories, with the exception of South Korea -which was responsible for nearly a third of its entire overseas opening. The $2.1 million from the South Korean premiere of White House Down is about five times the opening gross of Olympus Has Fallen.

After Earth is alive and well overseas, bringing in $9.9 million from 73 markets in its fourth weekend. The sci-fi flick has a $130.9 million overseas cume that has helped mitigate the damage from its disastrous North American run. Spain was the top new market for the film, earning the top spot at the box office with a $3.3 million debut.  After Earth has a global total of $189 million. It is set for a July 11 release in China and Portugal, where strong performances could potentially lift the film above Tom Cruise's Oblivion.

Oblivion is closing out its overseas run, and it looks like it will fall short of the $200 million mark. The $196.5 overseas total from the Tom Cruise sci-fi vehicle helped save face from an underwhelming $89 million performance in North America. The sci-fi film's global total is $285.5 million.

Fast & Furious 6 grossed $6.1 million from 64 territories over the weekend, raising its overseas total to $448.7 million. It is currently the second highest grossing film of 2013 overseas, trailing the juggernaut $805 million performance from Iron Man 3. Fast 6 has grossed $682 millioworldwide. The action film will continue its run to the $500 million overseas mark with a July 6 release in Japan and a theatrical run in China beginning on July 26.

Star Trek Into Darkness reached a $217.6 million overseas cume in its eighth weekend outside of North America. The sci-fi film grossed $2 million from 34 territories over the weekend and should see a bigger boost to its $436 million global total after its release in Spain next week.

Vince Vaughn and Owen Wilson might want to rethink if they should have taken The Internship. The comedy has fallen flat in North America with a mediocre $41.7 million take. The film has covered about half its overseas run, posting a $14.9 million overseas total from 33 markets. The top performing territories are Australia ($5.7M) and Russia ($3.1M). The Internship has grossed $56.6 million worldwide with 31 markets left for the Vaughn/Wilson comedy.

The Purge reached a $10.1 million overseas total from 13 territories. The low-budget thriller film has been unable to live up to its strong North American debut but will still become a profitable project for Universal. The film is currently posting a $72.9 million global cume.

This is the End is slowly trickling out an overseas release. The comedy opened in the U.K., only its second sizable territory outside of North America, with a $2.2 million opening weekend. The overseas total for This is the End is $2.4 million, bringing its global cume to $77 million.