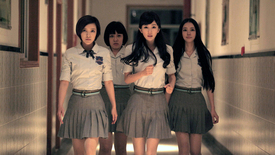 Tiny Times had a big weekend in China. The domestic film scored the largest opening day in the country's box office history on its way to a four-day $42.76 million total. Tiny Times doubled the weekly gross of Man of Steel's first full week of release.

Chinese films have been having more success with local audiences, tapping into a diversity of genres and paying attention to different demographics. China Daily reports that 117 of the 146 films in China screened this year have been domestic productions, with foreign ticket sales falling 26.8% in the first half of the year.

This hasn't overshadowed the performance of Hollywood hits in China. Iron Man 3 co-existed with domestic hit So Young during a blockbuster run for both films. Man of Steel survived early heat from action thriller Switch in its opening weekend and still managed to gross $21.14 million in a week dominated by Tiny Times. Tiny Times is the first of a four part series targeted at a teenage female demographic. The Chinese film nearly matched Man of Steel's China cume in four days.

Badges of Fury also took a back seat to Tiny Times, falling to third place with an $18.3 million weekly take. The biggest drop of the weekend came from Switch, coming out of its third week in release with a paltry $420k sum. Switch has earned a total of $46.82 million in China, but its nearly unanimous negative reception by critics looks to have hurt its long-term viability at the Chinese box office. China is one of those markets where a film can find legs and survive, as was the case for the record-setting performance of last year's Lost in Thailand or this year's Seeking Mr. Right. 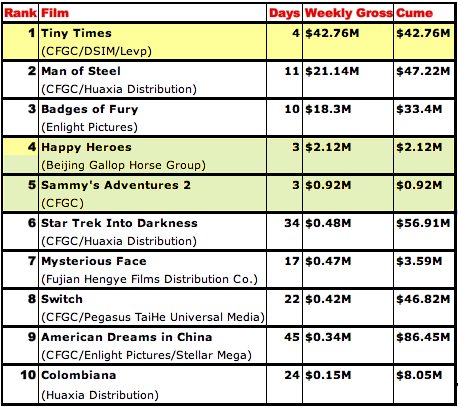