It was a huge weekend for Despicable Me 2 in the United Kingdom. The minions took over the market with a whopping $22.5 million weekend. The animated film's box office tally towered above the competition with a $42,227 per-screen average. The numbers for the animated film include preview screenings from the previous weekend. Man of Steel was far behind, only managing to rake in $3.7 million over the weekend. The weekend was good enough for the Superman reboot to cross the $40 million mark in the United Kingdom, reaching a $40.6 million cume. World War Z was close behind, finishing in third place with a $3.6 million take. The Brad Pitt zombie epic reached the $15 million milestone in its second week of release.

This is the End brought laughs along with its destruction, joining an end-of-the-world themed top four list at the U.K. box office. The raunchy apocalypitic comedy grossed $2.1 million in its opening weekend. It's a good start for the latest Seth Rogen project, which is still far away from reaching the same heights as the Hangover franchise. The Hangover Part III has grossed $29.2 million after six weeks of release in the United Kingdom. Steven Soderbergh's Behind the Candelabra continues to impress in its limited release, reaching a $4.5 million total. The box office run of Soderbergh's latest should turn heads in North America, where the film was passed over for theatrical release. 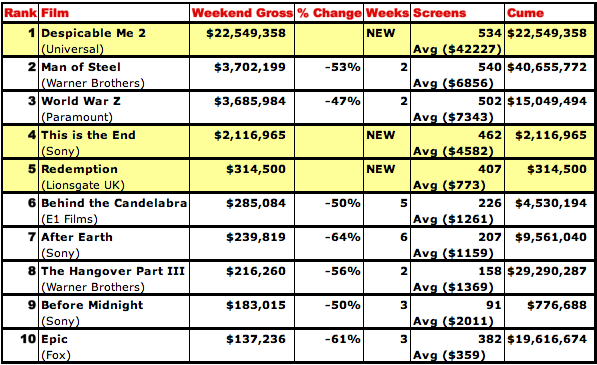 Tags: UK: Despicable Me 2, World War Z, Man of Steel, The hangover part iii, behind the candelabra, this is the end