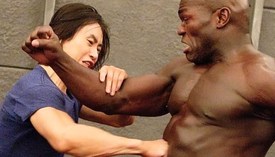 Expectations were high coming out of the gate for Man of Tai Chi, Keanu Reeves' directorial debut produced in collaboration between China Film Group, Village Roadshow Pictures, and Wanda Group. The film's performance over its first week in China, however, proved to be disappointing, according to a story from The Hollywood Reporter. EntGroup is reporting that Man of Tai Chi earned $2.9 million over the weekend since its Friday premiere, well behind the $137.4 million grossed by fellow new release Blind Detective. Man of Tai Chi went on to suffer steep drops in daily grosses across China, falling down to the mid-table mark of the daily top ten on Sunday.

Keanu Reeves participated in a promotional tour in several Chinese cities for the film to no avail at the box office. Man of Tai Chi was also released in IMAX screens across China, but the film simply didn't stick with audiences. Man of Tai Chi occupied 17% of the screenings in mainland China on Friday but stumbled down to 12.3% by Sunday.