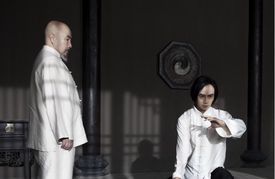 The top story coming out of China is in the middle of the top ten chart. Keanu Reeves stumbled out of the gate with his directorial debut, Man of Tai Chi, a co-production between the state-backed China Film Group, Wanda Group, and Village Roadshow Pictures. The project combined the A-List Hollywood draw of Keanu Reeves with a Chinese narrative in Mandarin and Cantonese. It looked great on paper, suggesting the possibility of more Hollywood stars joining the fray and making films with China directed at Chinese audiences. If there's a formula to it, however, it looks like it will have to be tweaked. Man of Tai Chi flopped in China, grossing $2.85 million after three days in release and occupying fifth place in the weekly top ten chart. The film was also released in IMAX screens across the territory, with the potential of a similar roll-out around the world. After the disappointing numbers out of the gate, audiences outside of China might have to wait a while before seeing the directorial debut of Keanu Reeves.

Tiny Times was the undisputed champion once again, bringing in an additional $24.41 million to take its cumulative total to $67.67 million after eleven days. It has no guarantees to retain its top spot after the early success of Johnnie To's latest crime flick, Blind Detective. The thriller grossed $13.65 million in four days, stealing all the thunder out of Man of Tai Chi by bringing in over five times the admissions of the Keanu Reeves picture.

Man of Steel continued its strong run during its third week in release in China. The Superman reboot has grossed $58.2 million in the market over 18 days and represents about 18% of Man of Steel's $315.3 million overseas gross. This has all been accomplished in the face of strong competition from domestic films like Switch, Tiny Times, Badges of Fury, and Bind Detective -all of which have outperformed Man of Steel in different intervals of its run. Staying power pays off in China, where holdovers can prove a film's long-term success as in the case of Star Trek Into Darkness and The Croods. 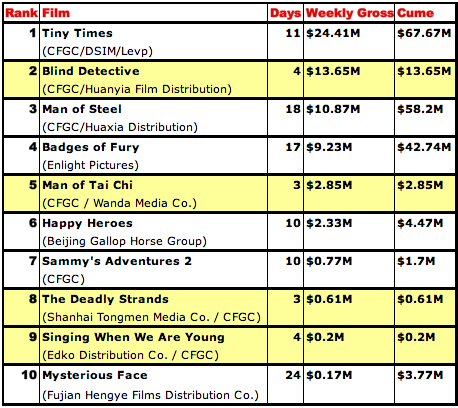