Despicable Me 2 proved that its box office resiliency can pay off. The animated film placed second during its first two weeks in Australia, only to come back for its third frame to claim the top spot with a $4.2 million weekend that represents a 6% boost from the previous weekend. The minions packed a bigger punch than Man of Steel, which placed in second in its sophomore frame. The Superman reboot has taken $15.3 million from Australia.

The Lone Ranger flopped in its debut, grossing just slightly above the third week of Disney's other release in the market, Monsters University. The Lone Ranger took in $3.2 million from its opening frame while Monsters trailed it closely with a $3.1 million take. Monsters U has grossed a cue of $13.8 million, proving less popular than the Despicable Me sequel which has already broken the $20 million mark in the same timeframe. 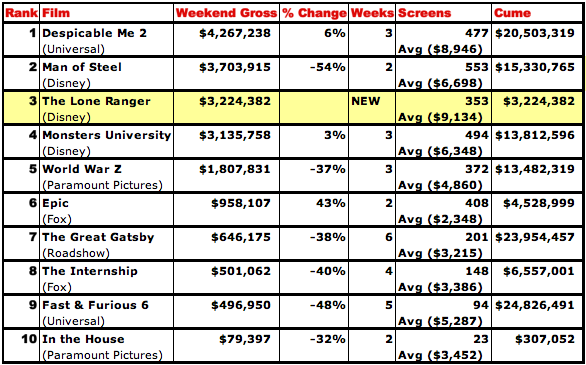