Despicable Me 2 closed out its first weekend in Brazil with a $5.7 million total. The animated film had little competition in a weekend dominated by holdovers and the limited release of Now You See Me.

World War Z came in second place with a $2.4 million weekend, a solid hold that represents a mere 19% drop from the previous weekend. Monsters University reached a $12.6 million cume after three weeks in release, falling down to fifth place after a 66% drop from its last frame. The Hangover Part III and After Earth look to be on their way out of the chart; the comedy has grossed a total of $16.1 million in Brazil while the sci-fi flick has a cumulative gross of $6.3 million. 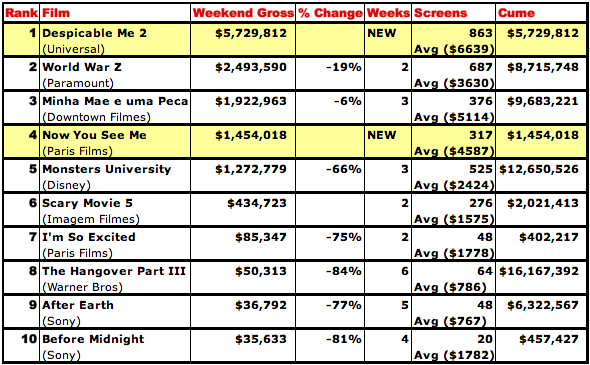