Despicable Me 2 took in $6 million in its opening weekend to take the top spot at the German box office. The animated film opened in 697 screens for a territory-leading $8,688 average. It faced little competition from The Heat, which opened in the comedy-friendly territory to $1.1 million. It's a disappointing take for the Fox comedy, with expectations originally set on a similar run to Bridesmaids, director Paul Feig's previous outing with actress Melissa McCarthy. Bridesmaids grossed a total of $8.1 million in Germany, a figure that The Heat is unlikely to reach.

World War Z placed second with a $2.7 million weekend that raised its total to $12.1 million. Disney's Monsters University also broke the $10 million mark over the weekend, placing fourth with a $813k weekend to take it over the milestone. Man of Steel has been less fortunate in Germany, where the Superman reboot has only grossed $8.5 million in three weeks. The Hangover Part III and Fast & Furious 6 both took a big step towards the $30 million mark. The comedy has grossed $29.9 million in 6 weeks while the latest entry in the Fast franchise has grossed $29.3 million in seven weeks. 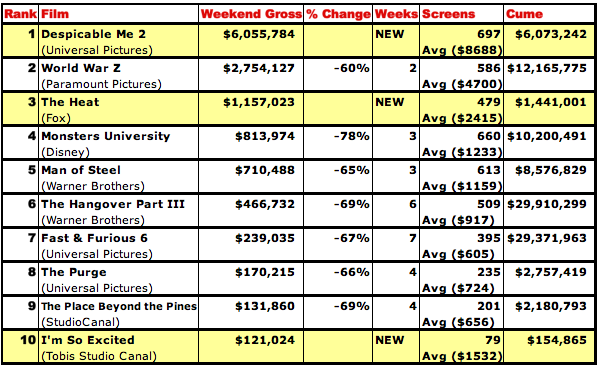