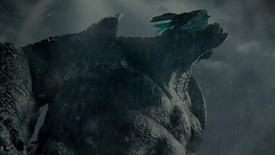 Pacific Rim looks poised to defy the weak tracking numbers that indicated it would open to $25 million. The sci-fi flick is surging just in time for its release thanks in large to part enthusiastic reviews. The Warner Bros. release currently boasts a 76 percent approval rating on Rotten Tomatoes.

Fandango reports that Pacific Rim accounts for 60% of Fandango's advance sales for the upcoming weekend, and it is currently outpacing World War Z at the same point in the release cycle. World War Z opened to $66.4 million. If Pacific Rim matches that haul it would be one of the summer's biggest surprises and it would silence pundits who are ready to pounce on the film.

BoxOffice.com currently forecasts a $41 million debut for Pacific Rim. It's important not to underestimate Grown Ups 2, a comedy that has been strong Facebook and Twitter activity in the weeks leading up to its release. The impact of Despicable Me 2 is also not to be ignored. Universal's animated flick should hold quite well during its sophomore frame thanks to glowing word of mouth.

LOS ANGELES -- According to Fandango, the nation's leading moviegoing destination, the highly-anticipated robots vs. monsters epic, "Pacific Rim," is the number one movie fans want to see this weekend -- scoring a sizable 90 out of 100 points on the company's Fanticipation buzz indicator. Runners-up were "Despicable Me 2," scoring an 87 in its second weekend, and Adam Sandler's summertime comedy, "Grown Ups 2" with 85 points.

"Pacific Rim" is grabbing 60% of Fandango's advance sales for this weekend. It is currently outselling another apocalyptic summertime spectacle, "World War Z," at the same point in that film's pre-sales cycle.

"The strong online and mobile ticket sales for ‘Pacific Rim' are impressive for an original film," says Paul Yanover, President of Fandango. "It's really exciting to see the movie build momentum and add to the summer season."

Based on a survey of more than 1,000 "Pacific Rim" ticket purchasers on Fandango:
• 86% said the positive online and mobile buzz for the film influenced their decision to buy a ticket
• 81% are fans of giant monster movies
• 64% claimed they were fans of "Pacific Rim" director Guillermo Del Toro.