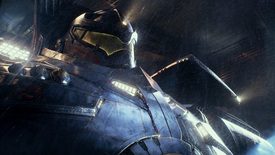 Sunday: Giant robots fought giant sea-monsters across movie screens around the world this weekend. Pacific Rim was released in 38 overseas markets, about half of the overseas market, earning a total of $53 million from over 9,800 screens. Guillermo del Toro's high concept tent-pole posted a $91.3 million global tally for its day-and-date opening weekend.  The IMAX numbers for the film came in at $4 million from 124 locations, a $32k per-screen average.

South Korea came in as the biggest overseas performer for the popcorn flick with $9.6 million. Russia contributed a $9.3 million weekend that scored 177% above the Transformers 2 opening in the country and 208% ahead of the debut of War of the Worlds. Mexico brought in $5.8 million, placing behind the runaway success of Despicable Me 2 for the #2 film in the territory. A tsunami ripped through Taiwan over the weekend but couldn't stop a fantastic $3.5 million performance from the Guillermo del Toro film. Pacific Rim became the biggest opener of the year for Warner Bros. in Thailand, grossing above Man of Steel with a $2.4 million debut.

Pacific Rim took in $3.2 million from 907 screens in the United Kingdom, ranking second in the market behind the premiere of Monsters University. The film struggled against the opening of The Heat and the fourth weekend of Despicable Me 2 in Australia, coming in third place with a $2.6 million opening. The film still has several major territories left, including France on July 17, Germany on July 18, China on July 31, and an August 9 release in Spain, Japan, and Brazil.

Fast & Furious 6 reached a $704.2 million global cume this weekend, ahead of its July 26 release in China. The film has grossed $467.7 million overseas, including a strong $2.4 million second week hold in Japan that brought its total in the territory to $10.3 million -more than twice the gross of its predecessor in the same timeframe. Fast 6 has already grossed a total of $467.7 million overseas, a marked improvement over the $418.8 million overseas cume of Fast Five.

Monsters University could hit the half-billion global mark by August after another strong overseas performance brought in an additional $30.8 million to its overseas total. The Pixar film has grossed a cume of $236.4 million from 45 territories, around 86% of the overseas market. The current global cume is $474.2 million. Monsters U opened this weekend in the United Kingdom to $5.3 million and in France to $3.7 million. Monsters University broke the box office record as the biggest animating opener of all time in Hong Kong and posted the sixth biggest opening weekend ever in the territory. Taiwan is showing similar success, making Monsters University the second biggest animation release of all time in the country with $6.5 million. The top overseas markets for Monsters University are Mexico ($36M), Russia ($20.3M), Australia ($19.2M), Japan ($18.8M), Argentina ($17.5M), Brazil ($15.4M), Spain ($11.5M), Germany ($11.2M). Monsters University opens in Iceland next weekend, Italy on August 21, and China on August 23.

Despicable Me 2 is right on pace with Monsters University. Universal's animated sequel posted another huge weekend overseas, bringing in $55 million from 50 territories. This brings the current overseas cume for the animated sequel to a $243.3 million total, nearly twice the gross of Despicable Me ($129.3 million) in the same timeframe. Universal expects the film to pass the $293 million lifetime gross of Despicable Me this week. Despicable Me 2 currently has a worldwide cume of $472.4 million. The film became Universal's biggest opener in Lithuania this weekend and posted the biggest opening day in Latvia's box office history. Thirteen territories are left for Despicable Me 2 in its overseas run over the next few months.

The Lone Ranger broke the $100 million mark in its second week of release. The Johnny Depp film has grossed a total of $48 million overseas and $119.1 million worldwide. The film is in release in 33 markets, representing approximately 35% of the market. A disappointing $1.2 million opening in Brazil took its cume in the country to $1.7 million when combined with previews. The top markets for The Lone Ranger are Russia ($12.4M), Australia ($6.7M), Argentina ($3.7M), Italy ($3.6M), and South Korea (2.3M). Many major territories are still left for the adventure film: Japan on August 2, France on August 7, Germany on August 9, the U.K. on August 9, and Spain on August 23. A Chinese release date is in the cards but has not been announced.

The Heat had a great weekend in Australia, becoming the top film in the market with a $3.7 million opening despite strong competition from the Pacific Rim debut and the fourth week of Despicable Me 2. It's another triumph for director Paul Feig and star Melissa McCarthy following the $28.9 million gross of their previous collaboration, Bridesmaids. The Heat has now taken in a total of $16.1 million from 30 markets to reach a $128.4 million cume. Other top earners for the comedy include Russia ($3.8M) and Germany ($2.9M).

Epic is still a consistent earner. The animated film reached a $137.4 million overseas total this weekend, brining its global cume to $242.2 million. Upcoming releases in Spain and South Korea could help the film reach the $250 million global mark.

Star Trek Into Darkness reached a $222.5 million overseas total in its tenth week in release outside of North America. The sci-fi sequel has now grossed $446.8 million globally.

The Purge is paying off for Universal. The thriller starring Ethan Hawke was reportedly made for $3 million and has already grossed $76.1 million worldwide. The overseas total for the film is $12.3 million from 14 territories.