AUSTRALIA: 'The Heat' Rules Down Under 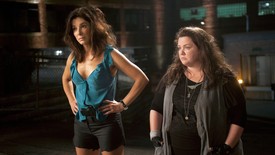 Director Paul Feig and actress Melissa McCarthy have first-hand experience of what it takes to succeed at the Australian box office. Their 2011 comedy, Bridesmaids, grossed a total of $28.9 million in Australia, constituting 24% of the film's total overseas gross. Even Melissa McCarthy's last picture, Identity Thief, managed to earn 18% of its $40.5 million overseas cume from the territory, making Australia the most profitable overseas market for the Universal comedy.

Feig and McCarthy returned to Australia last weekend with their latest outing, The Heat. The film proved popular enough to lead the weekend box office, coming in first place with a $3.5 million opening weekend that edged out a competitive $3.4 million take from Despicable Me 2's fourth frame. Despicable Me 2 has had a consistent run in Australia, currently posting a $27.1 million and outgrossing the $25.2 million from Fast & Furious 6 as the highest grossing film currently in release.

The Heat wasn't the only Fox comedy playing in Australia. The Internship is trying to rebound from a terrible run in North America by putting its hopes in the hands of the world's most comedy-friendly markets. Australia is a key territory in that equation and has done its fair share of help by giving the struggling comedy a $7 million take over the last five weeks.

Pacific Rim premiered in Australia almost as an afterthought, placing in third behind The Heat and Despicable Me 2. Pacific Rim's $2.7 million opening weekend isn't a major disappointment, however, taking into account the domination of family films and comedies during this time of year in Australia. The packed release calendar is also responsible for a similarly slow start from The Lone Ranger, which has fought for every cent in its $6.5 million Australian run in the last two weeks.

Monsters University brought in $2.5 million to bring its total to $18.8 million in its fourth weekend. World War Z added another million to its Australian cume in the same timeframe, reaching a $15.4 million total. Man of Steel finished its third weekend in Australia with a $1.9 million take to see its cume in the territory reach $19 million.