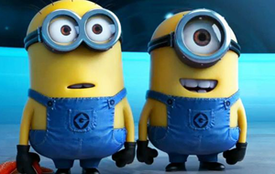 Despicable Me 2 continues to earn in Germany. The animated sequel earned $5 million in its second weekend , a superb 16% drop, to bring its cume in the territory to $13.3 million. World War Z is also posting a strong hold in the territory. Brad Pitt's zombie epic earned $1.7 million in its third weekend to take its total to $14.8 million.

Now You See Me opened in Germany to a $1.1 million weekend. The Heat held strong in its second weekend, dropping 16% while increasing its screen count by 5%. Paul Feig's latest Melissa McCarthy comedy has grossed a total of $2.8 million in the comedy-friendly territory.

Man of Steel and Monsters University have struggled to reach blockbuster numbers in Germany. The Pixar prequel has grossed a total of $11.1 million over four weeks, the same timeframe that has taken the Superman reboot to bring in $9.2 million.

Two big hits are closing out their German run. The Hangover Part III is on its way out after reaching a $30.3 million total in the market after seven weeks. Fast & Furious 6 rounds out the top ten list by posting a $29.5 million cume after eight weeks.