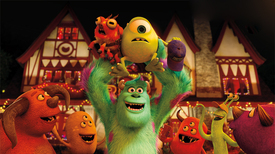 A $5.2 million opening weekend for Monsters University led the box office chart in the United Kingdom. The Pixar prequel played in 525 screens for a market-leading $9,968 average. The debut for the animated film pushed Despicable Me 2 down to second place with a $3.3 million take in its third weekend. The minions have dominated the market in the United Kingdom since the film's release, posting a $40.8 million cumulative total.

The animated films stole the headlines and also most of the thunder from Pacific Rim. Guillermo Del Toro's high-concept tent-pole came in third place with a $3.3 million debut from 494 theaters. Now You See Me was the only other film to break the million-dollar mark in the U.K. over the weekend. The magic heist film has grossed a total of $8 million after two weeks in release.