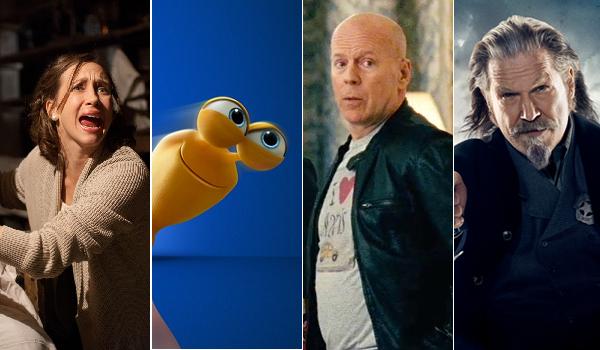 Sunday Update: Warner's The Conjuring easily led the weekend box office with an estimated $41.5 million. The R-rated horror film exceeded its rising pre-release expectations and performed especially well with its modest price tag in mind. The Conjuring opened 22 percent stronger than the recent $34.06 million debut of The Purge. The film's $17.03 million Friday start (which included an estimated $3.3 million from late night shows on Thursday) was in the same neighborhood as the $16.78 million Friday debut of The Purge (which included $3.4 million from late night Thursday shows), but The Conjuring held up far stronger throughout its opening weekend than The Purge did. The estimated opening weekend to Friday ratio for The Conjuring stands at 2.44 to 1, as opposed to the 2.03 to 1 ratio of The Purge. That is a strong early sign for The Conjuring going forward, as high profile horror films are typically far more front-loaded towards Friday than that during opening weekend.

Strong reviews and early word of mouth are clearly helping The Conjuring and it appears that the film's subject matter and strong marketing campaign are helping it appeal to more causal horror fans to begin with. The Conjuring received an A- rating on CinemaScore, which is especially strong for a horror film. The audience breakdown for the film skewed towards female moviegoers (53 percent) and fairly heavily towards moviegoers over 25 years old (59 percent).

As was widely expected, Universal's Despicable Me 2 was able to hold off the weekend's other three wide releases to take second place for the frame. The computer animated blockbuster from Illumination Entertainment fell 43 percent to gross an estimated $25.1 million. That represented one of the weekend's better holds among wide releases, which is a sign that the film is now stabilizing by family film standards, especially given the new competition it faced from fellow computer animated film Turbo. Despicable Me 2 has grossed a massive $276.2 million in 19 days, making it the third highest grossing release of 2013 domestically thus far. The film will soon overtake Warner's Man of Steel for second place on the list.

Fox's Turbo debuted in third place with an estimated $21.5 million. The latest computer animated film from DreamWorks Animation debuted towards the lower end of expectations, which were already relatively low for a DreamWorks Animation release due in large part to the film arriving on the scene so shortly after Despicable Me 2. Since its debut on Wednesday, Turbo has grossed $31.20 million in its first five days of release. That is a slim 3.5 percent below the $32.34 million five-day start of last November's Rise of the Guardians (which also opened on a Wednesday). Turbo did receive a very promising A rating on CinemaScore, though the film's long term prospects could be limited by upcoming competition from both Sony's The Smurfs 2 and Disney's Planes in the near future.

Opening a bit below Turbo was Lionsgate's Red 2. The Bruce Willis led action sequel debuted in fifth place with an estimated $18.5 million. That was slightly below expectations and was 15 percent softer than the $21.76 million start of 2010's Red. Given its nature as sequel, Red 2 is likely to be more front-loaded going forward than Red was, though it could still display strong holding power of its own, especially given just how strong Red held up during its run. The film opened with $6.35 million on Friday (which included $0.80 million from late night Thursdays shows), giving it an estimated opening weekend to Friday ratio of 2.91 to 1. Red 2 received a B+ rating on CinemaScore. The audience breakdown for the film skewed towards male moviegoers (52 percent) and heavily towards moviegoers over the age of 35 (67 percent).

Coming as no real surprise, Universal's R.I.P.D. delivered the weekend's poorest start among new wide releases. The big-budget action comedy starring Jeff Bridges and Ryan Reynolds debuted with a very disappointing estimated seventh place take of $12.76 million. That was 22 percent below the $16.31 million debut of last year's Abraham Lincoln: Vampire Hunter. R.I.P.D. opened with $4.8 million on Friday (which included $0.77 million from late night Thursday shows), giving it an estimated opening weekend to Friday ratio of 2.66 to 1. Long term prospects don't look encouraging for the film either, especially given its lackluster C+ CinemaScore rating and that being adapted from a comic book should lead to additional front-loading to begin with. The audience breakdown for R.I.P.D. skewed towards male moviegoers (53 percent) and towards moviegoers 25 and older (57 percent).

Meanwhile, Warner's Pacific Rim fell three spots and 57 percent to land in sixth with an estimated $15.96 million. Despite strong reviews and seemingly positive word of mouth among moviegoers, Pacific Rim is having a tough time expanding beyond its initial heavily fan driven audience. The Guillermo del Toro directed sci-fi action film has grossed $68.24 million in ten days, placing it 1 percent ahead of the $67.35 million ten-day start of 2011's Cowboys and Aliens.

Platform results weren't anywhere near as impressive for Roadside's Girl Most Likely and RADiUS-TWC's Only God Forgives. The Kristen Wiig led Girl Most Likely debuted with an estimated $736,006 from 353 locations for a soft per-location average of $2,085. The Ryan Gosling led Only God Forgives grossed an estimated $315,008 from 78 locations for a modest per-location average of $4,039.

Saturday Update: Who needs A-list actors and special effects? The Conjuring is set to easily win the weekend without the burden of stars who demand massive salaries and expensive visual touches. WB reports that the horror flick took in a healthy $17 million on Friday. BoxOffice projects that the fright flick will grab $40 million before the weekend is through. That easily trumps the $34 million debut of The Purge, another a horror movie that shattered expectations this summer.

According to Fox, Turbo roped in $6.5 million on Friday, pushing its three-day haul to $16.2 million. BoxOffice projects that the animated flick will grab a modest $21 million from Friday-Sunday, which will put it at around $30.7 million over its first five days of release. Turbo has two weeks to rebound from this slow start before it will face tough competition from Sony's The Smurfs 2.

Universal's R.I.P.D. took in only $4.8 million on Friday, which puts it on pace for a paltry $12.2 million during its debut frame. July is turning out to be the home of this summer's biggest disappointments. First came Lone Ranger, then Pacific Rim--mainly just a domestic disappointment--and now R.I.P.D. Ryan Reynolds may be hurt the most by R.I.P.D.'s failure. The actors two attempts at setting up a tentpole franchise--Green Lantern is the other--have bombed.

Red 2 snagged $6.34 million on Friday. The sequel should end up with $18 million this weekend, which represents a small drop from the $21.7 million that Red managed back in 2010.

On a positive note for Universal, Despicable Me 2 is on pace to to gross $24.4 million this weekend after snagging $7.5 million on Friday. That will push the animated flick past $275 million in North America.

Grown Ups 2 and Pacific Rim are both set to experience substantial drops during their sophomore frames. Grown Ups 2 managed $6.4 million on Friday compared to $4.7 million for Pacific Rim.

The Way, Way Back is performing very well after expanding to more than 300 theaters this weekend. The coming-of-age tale is tale is on pace for just over $2 million after posting $616K on Friday. The Fox Searchlight release will expand to 650+ locations next weekend.

Friday Update #5: Sources tell BoxOffice that The Conjuring is looking even stronger now. A debut frame of $38 million seems possible based on what could be an $18 million haul on Friday. $40 million can't be ruled out, especially if positive word of mouth kicks in.

Friday Update #4: Sources tell BoxOffice that early Friday grosses indicate that this week's new releases are on pace for the following:

Once again, a low-budget horror film is going to trump Hollywood's attempts to get people into theaters with A-list stars. The fact that Conjuring is way ahead of the pack proves that studios don't always need to rely on bloated budgets to get moviegoers excited. The question now is whether or not The Conjuring will be able to top the surprising $34 million debut that The Purge managed earlier this summer. Right now, it looks like a very strong possibility.

Turbo is definitely a victim of bad timing. Being sandwiched in between Monsters University, Despicable Me 2 and The Smurfs 2, which opens on July 31, has turned out to be an insurmountable hurdle for the animated flick to overcome. Perhaps overseas grosses will make up for what's shaping up to be an underwhelming domestic haul.

Red 2 has successfully tapped into the need for an action film that doesn't rely on twentysomething actors. Co-star Bruce Willis is the very definition of "hit and miss." Willis stumbled earlier this year with Live Free or Die Hard, but with Red 2 he has another success on his hands. Expect Red 2 to hold up well in the weeks to come.

Mark Universal's R.I.P.D. down as one of Summer 2013's biggest disappointments. The pairing of Jeff Bridges and Ryan Reynolds in an effort that bares similarities to the Men In Black flicks just didn't click with moviegoers. Yet if any studio can let a flop bounce off them this summer, it's definitely Universal. After the strength of Fast & Furious 6, The Purge and Despicable Me 2, R.I.P.D.'s weak performance doesn't hurt as much.

Official studio numbers and updated projections will be in tomorrow morning.

Friday Update #3: Fox reports that Turbo is up to $9.7 million after two day. The animated flick grossed $5.5 million on Wednesday and $4.2 million on Thursday.

Blame a crowded market on Turbo's slow performance. Families came out in droves to support Monsters University at the end of June and Despicable Me 2 the last two weekends, so there's not a lot of disposable income left for Turbo, an original animated project that doesn't have the advantage of an established fan base. There's little doubt at this point that Turbo will lose the weekend to The Conjuring.

Universal's R.I.P.D. took in a modest $773K from Thursday shows. That's not a bad start, but it's far from blockbuster-level numbers.

Early Friday Update: Sources tell BoxOffice that The Conjuring looks to have topped at least $3 million during Thursday night previews.

That compares well against the $3.4 million preview tally of The Purge and $3.6 million from World War Z.

Combined with the film's #1 ranking on Fandango sales for Thursday, this is a great start to the Warner Bros. horror flick's weekend.

More updates later in the day.

Thursday: Fox reports that Turbo took in $5.6 million on Wednesday, which was just enough to top Despicable Me 2's $5.2 million haul in order to snag first place on Wednesday.

The victory looks like it will be short lived, because all signs point to a breakout weekend for The Conjuring. Fandango reports that The Conjuring is the #1 ticket seller today across its online and mobile platforms.