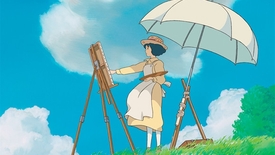 A 4-minute trailer has been released for The Wind Rises, Miyazaki Hayao's first film in five years. [Twitch]