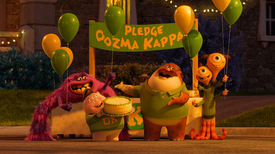 Monsters University still rules in the U.K. The Pixar prequel posted a strong hold, only a 19% drop from its opening weekend, on its way to earning $4.2 million over the weekend and reaching a $13.1 million cume. Monsters U beat out director Edgar Wright's reunion with stars Simon Pegg and Nick Frost in The World's End. The trio has previously collaborated in cult comedy hits like Shaun of the Dead and Hot Fuzz. Their fan-following accounted for a $3.2 million opening weekend across 530 theaters.

Despicable Me 2 hit a major milestone by reaching a $45.7 million total over the weekend, enough to surpass the $45.6 million that Man of Steel has grossed over six weeks. It only took the Minions four weeks to get ahead of the Superman reboot. Despicable Me 2 is showing no signs of slowing down after posting a $2.8 million weekend, only a 19% fall from last week's performance.

Pacific Rim tumbled down to fourth place in its second week of release, adding $2 million to take its total to $7.8 million. Guillermo del Toro's film won't pull in the blockbuster numbers it needs to overcome a slow run in North America. Pacific Rim, however, is having a much easier time at the box office than The Internship. The Fox comedy failed to find a significant audience in the United Kingdom, disappointing with a $4.3 million tally over three weeks. 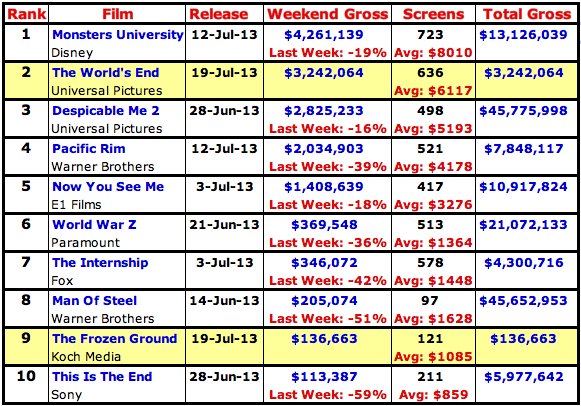