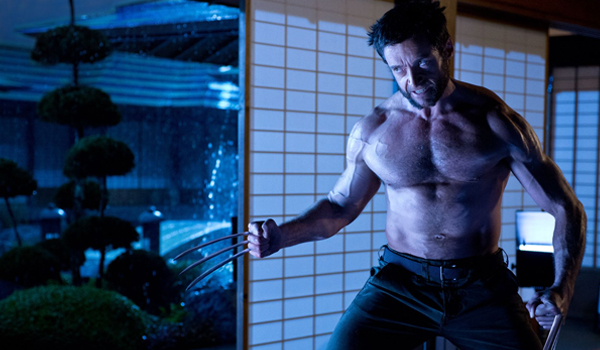 Sunday Update: It was a bit of a mixed bag for The Wolverine at the box office this weekend. The sixth installment of Fox's X-Men film franchise easily led the weekend box office with an estimated debut of $55.0 million. On one hand, that was significantly below pre-release expectations for the film, which ranged anywhere from $60 million to $80 million. But on the other hand, The Wolverine still delivered this July's second largest debut (behind only Despicable Me 2) and performed reasonably well with its price tag in mind (which was significantly lower than those of each of the previous three X-Men films).

Going forward, The Wolverine will obviously hope to display holding power more along the lines of X-Men: First Class than that of X-Men Origins: Wolverine. The film's A- rating on CinemaScore is a promising early sign in that direction, as is the film's estimated opening weekend to Friday ratio of 2.62 to 1, which (if the estimate holds) is a bit stronger than the 2.57 to 1 opening weekend to Friday ratio registered by First Class. The Wolverine took in $21.0 million on Friday (which included an estimated $4 million from late night Thursday shows that began at 10 p.m.), fell 12 percent on Saturday to gross $18.43 million and is estimated to fall 15 percent on Sunday to take in $15.58 million.

On the heels of last weekend's stronger than expected start, Warner's The Conjuring held up very nicely for a horror film in its second weekend. The modestly budgeted James Wan directed film grossed an estimated $22.1 million to place in second. That represented a 47 percent decline from last weekend. With a tremendous $83.87 million in ten days, The Conjuring has already zoomed past the respective $71.63 million and $64.26 million total grosses of this year's Mama and The Purge. The Conjuring is having the type of performance we don't see very often from horror films (especially in recent years) and will surpass the $100 million domestic milestone before much longer. The Conjuring should continue to hold up well going forward thanks in part to strong word of mouth and a lack of new horror films entering the marketplace over the next few weeks.

Also holding up nicely this weekend was Universal's Despicable Me 2. The computer animated blockbuster from Illumination Entertainment fell 36 percent from last weekend to place in third with an estimated $16.0 million. In the process Despicable Me 2 surpassed the $300 million domestic milestone this weekend, making it just the second release of 2013 to do so thus far (the other being Iron Man 3). Despicable Me 2 has grossed $306.39 million in 26 days. The film will soon face new competition for family audiences, with Sony's The Smurfs 2 arriving on Wednesday, and Fox's Percy Jackson: Sea of Monsters and Disney's Planes both arriving the following week.

Fellow computer animated film Turbo followed in fourth place with an estimated $13.3 million. The Fox and DreamWorks Animation release was down a very solid 37 percent from last weekend. Turbo has grossed $55.77 million in twelve days of release. That places Turbo 16 percent ahead of the $48.84 million twelve-day take of last year's Rise of the Guardians. However, given the already mentioned new family films on the near horizon and the holiday boost experienced by Rise of the Guardians later in its run, Turbo will be hard pressed to remain ahead of the pace of Rise of the Guardians.

In other box office news, Sony's Grown Ups 2 surpassed the $100 million domestic mark this weekend. The Adam Sandler led comedy sequel placed in fifth for the weekend with an estimated $11.5 million. Grown Ups 2 was down a solid 42 percent from last weekend and has now grossed $101.66 million in 17 days. That places the film 8 percent behind the $110.72 million 17-day take of 2010's Grown Ups.

In its first weekend of wide release, The Weinstein Company's Fruitvale Station took in an estimated $4.66 million from 1,064 locations to place in tenth. That gave the early awards season hopeful a good, but not great per-location average of $4,377. Given its per-location average this weekend, Fruitvale Station will likely need to depend more so on strong word of mouth and awards buzz than further theatre expansions going forward. The film's estimated weekend to Friday ratio of 3.22 to 1 is a promising early sign. Fruitvale Station has grossed $6.34 million to date, which is already a strong showing given the film's ultra-low budget.

On the platform front, Sony Pictures Classics' Blue Jasmine was off to a very strong estimated start of $612,767 from six locations in New York and Los Angeles. That gave the Woody Allen directed film starring Cate Blanchett a massive per-location average of $102,128 for the frame. If the estimate holds, Blue Jasmine will just outpace the $599,003 six location platform launch of Midnight in Paris back in May of 2011. Blue Jasmine will expand into additional locations next weekend and throughout the month of August.

Saturday Update: Fox reports that The Wolverine grossed $21 million on Friday, including $4 million from Thursday night shows. Based on that figure, BoxOffice projects the Hugh Jackman sequel will bank $54 million over opening weekend.

Those numbers are solid especially at the tail end of a very busy summer, but The Wolverine is falling short of most expectations. By comparison, Captain America: The First Avenger debuted with a $25.7 million opening day as part of a strong $65.1 million weekend on the same weekend two summers ago.

Few expected this latest franchise entry to reach the $34.4 million opening day and $85.1 million weekend of 2009's X-Men Origins: Wolverine, but the 39 percent gross decline in first day business is notable given that it was the last time Wolverine led a film. In terms of attendance on opening day, The Wolverine declined a massive estimated 50 percent from the 2009 prequel and marks the least-attended X-Men franchise film to date.

While it is likely that some fatigue is responsible for the softer demand (this is Wolvy's fifth turn as the lead character, after all), the good news is that word of mouth appears much stronger out of the gate for this entry. Flixster users currently give the film an 80 percent approval rating. On top of that, buzz for next year's X-Men: Days of Future Past has been steadily growing over the last few months as one of the most discussed films across social network platforms. Fans are clearly still excited for the future of the franchise, albeit with some cautious optimism. The Wolverine simply seems to have failed to connect with the general audience as strongly as previous series entries, likely thanks to the film's fan-centric premise (based on a popular comic book storyline) and a "been there, done that" vibe.  Nevertheless, chalk up an otherwise solid opening to the enduring popularity of Jackman and his interpretation of the character.

Meanwhile, TWC's Fruitvale Station posted an impressive $1.45 million on Friday after expanding into 1,064 theaters. Buzz around the film continues to grow, especially in the wake of this week's news that its directing and acting team of Ryan Coogler and Michael B. Jordan, respectively, will pair up for the Rocky spinoff, Creed. BoxOffice projects a $4.5 million weekend for Fruitvale Station. Word of mouth should continue to spread as one of 2013's early Oscar buzz generators.

Friday Update #4: The Wolverine now appears headed for a $22 million opening day. Topping the $55.1 million opening weekend of 2011's X-Men: First Class could be a challenge if that number holds with official studio estimates on Saturday morning.

Friday Update #3: Sources tell BoxOffice that The Wolverine is now looking closer to $23-24 million for Friday. That may yet change depending on West Coast business later tonight, but for now, the film looks to be heading toward a $60 million opening weekend.

Stay tuned to BoxOffice for studio estimates and our updated weekend projections on Saturday morning.

Friday Update #2: Early grosses indicate that The Wolverine is headed for $25 million on Friday, which would put it on pace for a $64 million debut frame.

The Wolverine will have no problem topping the $55.1 million debut of X-Men: First Class. It's clear that fans are slowly starting to forgive the franchise after being disappointed by 2006's X-Men: The Last Stand and 2009's X-Men Origins: Wolverine. This bodes well for 2014's X-Men: Days of Future Past, an effort that will combine the new cast from First Class and the old cast from the original X-Men trilogy.

Friday Update #1: Fox reports that The Wolverine snagged a healthy $4 million from Thursday evening shows. The action flick only started at 10 p.m., so it didn't benefit from earlier screenings like other releases this summer.

The Wolverine topped World War Z's $3.6 million haul on Thursday. That's a promising sign for the Fox release considering that WWZ kicked off its theatrical run with an impressive $66.4 million debut frame. World War Z started showing at 8 p.m. on the Thursday before hitting theaters.

Thursday Update: Fandango reports that The Wolverine is outpacing 2011's X-Men: First Class by an impressive 39% margin at the same point in the sales cycle. First Class debuted to a healthy $55 million in June 2011, so the strong sales bode well for The Wolverine. Hugh Jackman's latest take on the iconic character also accounts for 51% of daily sales on Fandango.

A Fandango survey of 1,000 Wolverine ticket buyers reveals the following:

91% have seen the previous X-Men and Wolverine movies
73% would not want to see a Wolverine film without Hugh Jackman in the title role
70% say the exotic setting has increased their interest in seeing the movie
A whopping 95% cannot wait to see the follow-up film, X-Men: Days of Future Past

Check back tomorrow morning to see how much the film rakes in from Thursday evening shows.