Russia has been serving as a life-preserver for films coming off disastrous runs in North America. The country has helped rescue After Earth with $17 million, making it the second-most important market for M Night Shyamalan's father-son sci-fi vehicle behind China. The Lone Ranger has had a similarly successful run, bringing in $15.1 million since its day-and-date debut -miles ahead of Australia, the second-ranked market, where the Disney film has grossed $8.3 million. Pacific Rim has taken off in Russia with $16.8 million in two weeks, posting both the biggest hold and cumulative gross of the film's overseas release.

R.I.P.D. joined the list with a $6.2 million opening weekend, accounting for a market-leading $7,660 average across 810 screens. R.I.P.D. will need many more markets to close in on Universal's reported $130 million production budget for the film, a figure that does not factor in the costly global P&A expenses that typically add tens of millions of dollars to a film's overall budget. R.I.P.D. has grossed $22.7 million worldwide and is currently in release in ten overseas territories.

Turbo had a mixed result when taking into account its wide release in 2,068 screens. No film played as extensively as Turbo in Russia, but the animated film only averaged $1,962 per screen for a $4 million opening weekend, taking its cumulative total to $7.9 million including previews. The weekend gross places Turbo in third place, but its cumulative gross makes it the week's most successful new release.

The big exception to this trend also came after this weekend's box office results. White House Down floundered with a $1.9 million opening weekend across a modest 634 screens. Roland Emmerich's action flick placed second in per-screen average, however, bringing in an estimated $3,139 from each location. 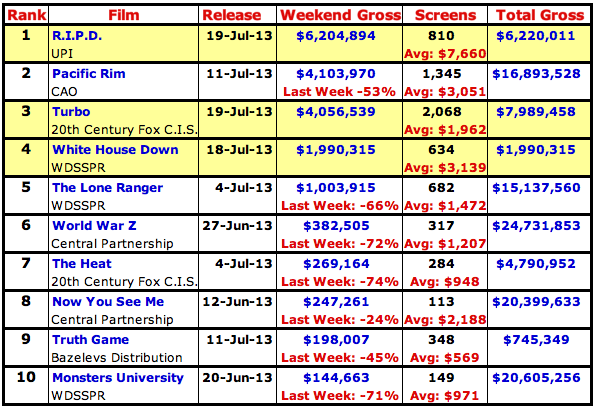