A $7.2 million opening weekend for The Wolverine led the box office chart in the United Kingdom. The superhero film opened in 522 screens and dominated the market with a $13,822 per-screen average. Monsters University placed second in its third frame with $4.7 million, taking its U.K. total past the $20 million milestone. Despicable Me 2 passed an even bigger milestone, reaching a $52.5 million total in its fifth week in release. The U.K. is the biggest overseas market for the animated Universal release. Depiscable Me 2 has grossed $662 million worldwide and is the third biggest film of 2013 at the global box office, behind Iron Man 3 and Fast & Furious 6.

The World’s End posted a strong hold in its second weekend, grossing $2.2 million and reaching an $8.3 million total in its home market. Now You See Me raised its cume after a $1.3 million weekend, reaching a $13.7 million cume. Pacific Rim was the last strong hold of the weekend, falling 45% in its third frame for a $1.1 million take. The Guillermo del Toro popcorn flick has earned $10.7 million in the United Kingdom. Noah Baumbach’s micro-budget Frances Ha impressed in limited release, breaking into the top ten with a $3,863 per-screen average across 60 locations. 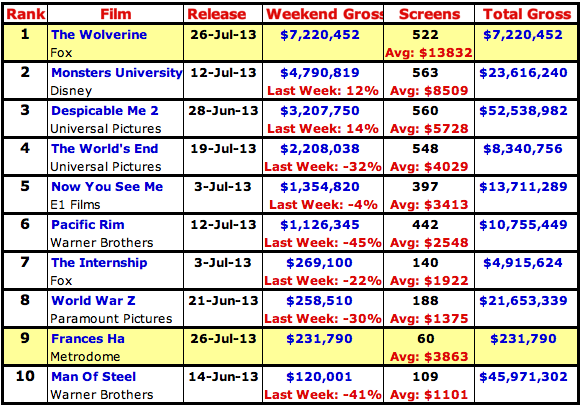