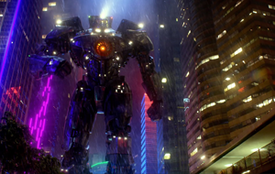 Warner Bros. celebrated their biggest opening weekend of all time in China, raking in $42.5 million from the debut of Guillermo del Toro's Pacific Rim. The success from China pushed the film past the $200 million mark overseas. Guillermo del Toro's popcorn flick has struggled in North America, grossing $92.9 million over four weeks and occupying the bottom spot in the region's latest top ten chart. Pacific Rim's Chinese debut propelled the film to a $53 million total outside of North America, making it the weekend's highest overseas earner despite a wide day-and-debut for Sony's The Smurfs 2. IMAX screens in China contributed $6 million to the film's numbers, the second-highest opening figure of all time in China's IMAX locations. Fast 6 came in second place with an $8.3 million that raises its 10-day cume to $52.3 million.

Chinese hit Tiny Times posted a $3500 weekend at three North American locations. The blockbuster's limited release has been confined to the tiny screen count for its two weeks in release and will not expand to any additional locations by next weekend. The cume for Tiny Times in North America is $21,365.